It's a new year, and a new Convention Season about to start up! Well, at least it's that time for me - I tend to count my Con Season begin with the first "major" convention that I do (which varies from year to year, either Katsucon or Shuto Con are the usual candidates).

So here I am to tell you where I'll be headed this year on a "Kind of a Tour But Not Actually a Tour" because I'll be having my books with me, along with my artwork depending on what I'll be doing at the show. And if that's not confusing already, I'll be doing a mixture of Guest Presenting and Vending, so you may need to take notes (I promise there won't be a quiz)! 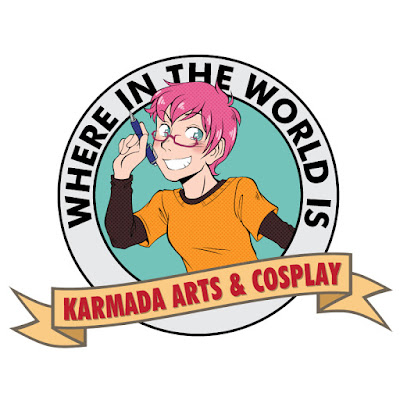 The following is a mostly comprehensive list (until I get some updates from other shows I'm waiting on. TBA usually means I'm trying to get further information but there's a decent chance I'll be there). Is there a show you think I should be at/vend at? LET ME KNOW! Also, if you'd like to see me as a guest somewhere - let THEM know they can contact me - check out my regular site: karmadaarts.com!

SEPTEMBER
TBA (I'm waiting to hear on some shows)

WHEW! That's a hearty list! And I'm sure I'll be adding to this as time goes by. I'm also going to work on adding these to the conventions page on the blog, juuuuust in case you wanted to check it out at any later time!
Posted by Karmada

Email ThisBlogThis!Share to TwitterShare to FacebookShare to Pinterest
Labels: Books, Conventions, Epic Cosplay Costumes, Where am I going to be?, where you can find me