A Convention Halfway Across the world (for me)... Animecon!

Through a wonderful chance, I got to attend the one, the only Animecon taking place at the World Forum in the Hague, Netherlands. It's an amazing show that was hosting a whole ton of cosplay competitions all over the world. I was there as part of Karmaluna cosplay participating in their standard Group Category.

I wanted to just kinda give you all a view of some of the neat stuff I saw and did while I was at the show (and honestly some of the stuff I wish our cons here would do).

The actual show Animecon took place at a cool location called the World Forum - it's basically a fancy convention center with a huge auditorium connected to it. 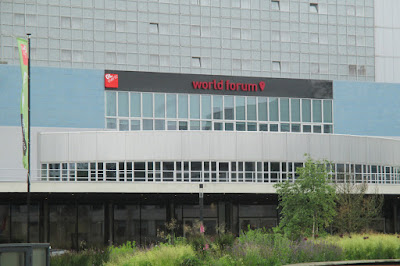 (Click the Read More for the rest of the adventure!)


It felt smaller than some cons I go to (I'd honestly call it a "midsized" convention), but it had a robust amount of people who came by.


And there were tons of cosplayers, of course! It was fun to see all the types of costumes that are worn in European conventions. I definitely realized that Geek is a universal language, and while I might not have been able to tell what the fans were saying all the time, they spoke with the same delight and vigor that we do here in the states. This not only warmed my heart, but helped my anxiety a little bit, because no matter the nationality, we were all one group: Geeks.


The vendor hall took us a little while to find, as most conventions are on single floor locations, or only have an upstairs, the World Forum had a downstairs. They did an interesting thing with their vendor hall - both artists and regular vendors were interspersed amongst each other.


I'm not sure how I felt about it - mostly because as an artist I'm used to having a separate artist area, but that didn't stop me from picking up some extraordinarily lovely artworks and speaking with some very lovely artists.

I felt kind of like the dumb American, as Dutch is a very interesting looking language, and sometimes hard to understand/read. But there were so many people there, and workers who understood English and there were usually English captions on almost everything so it wasn't too haphazard. I envy you all who can speak more than one language relatively well. Also, thank you for making me feel so welcome. :)

Now, onto my favorite part: THE FOOD COURT.

I had heard they did something odd here - which was you had to purchase "coins" in order to buy food at the show. This seemed weird, but it worked out great, and you didn't have anybody fumbling for change. Next, the other cool thing is they actually had like local businesses and restaurants come in and you could get freshly cooked food (asian for the most part, of course!) on site.


I honestly spent so much time here during downtimes because not only did they have meals, they had tasty snacks too. All made on-site. It was AMAZING.

It reminded me of having food trucks at a convention except instead of being outside, the stores came INSIDE and vended from there.


But enough about food! We were there to compete, and it was a lot of fun. Our competition was on the first day of the show - which was great. I'm always the person who likes to get the hard stuff done ASAP so I can enjoy the rest of the event.

Our day was full of preparing, dress rehearsals and judging, along with the performances that evening. The stage was amazing because it was a full actual stage with proper rubberized floor and everything.

We had a few mishaps along the way (our sound cut out at the start and we got to start over, BUT it stopped at the BEST possible time so it was funny in hindsight), but our costume changes all went as planned and I honestly couldn't ask for more.


We didn't end up winning, but it was an honor to be able to represent Home while competing abroad, and I hope that I did us justice! I loved being able to meet all the other lovely cosplayers there too, they were all so nice. Maybe we'll see you on this side of the pond someday? ;)

The next two days we got to watch all the other competitions which were great as well! So entertaining - and varied! We had dramatic skits and we had hilarious skits, and we had some that were somewhere in between. Winners all around, I say!

After a busy 4 days of working, and an extra day of sightseeing (and the ocean trying to come home in my shoes), I was happy, but glad to be home. I loved Animecon, and would adore some of the US cons adopting things like the food courts, and they had a really amazing manga contest, and were generally very supportive of ALL the extracurriculars people do at conventions.

I may not make it back there any time soon, but I had a lot of fun, and would definitely attend that show again!
Posted by Karmada