Epic Cosplay Costumes is set to be released September 1st of this year, and you can pre-order it on Amazon! Go here to check it out: https://www.amazon.com/Epic-Cosplay-Costumes-Step-Step/dp/1440245770

I knew from the start that the book Epic Cosplay Costumes (ECC) would be featuring a bunch of step by step tutorials - as that is the nature of a maker's book, but I wanted to add something extra. I wanted to add value to the book as a guide for future projects and just what exactly the process of cosplay is. But that's kind of a nebulous idea, when you get right down to it - however it is one of the most common questions I receive from people.

People want to make costumes, but aren't necessarily sure what that first step it. And a lot of costumes can look... complicated. Confusing.

Such as, how to go from something like this concept art (left) to full on costume (right) 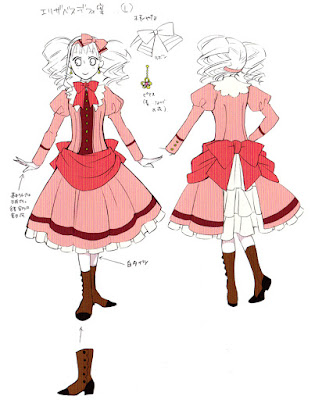 Because, for all intents and purposes, there really isn't a set group of patterns that's going to have exactly every character costume ever (though we're really trying to right now, and GOSH IT'S GREAT!). So my next big hurdle was how to condense 15 years of cosplay knowledge and techniques down into a single book. And that's when it came to me.

Every costume can be separated into easier to manage chunks, pieces you can get from various patterns or draft yourself! This is usually the first step I do. It might not be written down exactly all the time, but for me, it's the process of gathering the patterns I'll want to work with that represent bits and pieces of the costume I'm working on.

It's this process that I've written down, in hopes of helping cosplayers attacking those costumes they thought were impossible before! In the book there's a host of samples of types of garments you'll commonly see in costumes as well as regular patterns, along with some fun illustrated samples of costumes.

These costumes might light a little familiar as you read through the book - they're all the sample costumes photographed and placed in the book! So if you like one of the projects in our photos, we've got the breakdown for you (and they can all be made with projects included in the book!).

Now, not only will you learn that it's not too scary to break down costumes into parts you're looking for, there's one other important skill I wanted to teach readers through this book: Altering The Instructions.

NOW. I'm not talking about forgoing the instructions in the book, but what I'm really referring to is how to take each project and change it to suit your needs. Be it the color/type of fabric, the shapes added to pieces, lengths of sleeves, and more. Each fabric project includes ways you can "alter" each tutorial to get a whole host of other garments!


The only stipulation is that it's gonna require a little bit of bravery on your part. Due to space constraints I obviously couldn't go into extreme detail on how to make each change - but these images are here to spur on your imagination! To see the other garments types these projects can make.

And with that knowledge, you'll have the skills forming on how to make any costume your heart desires.