Wow. This is probably the "latest" Retro Recap I've ever done, but that's okay I was busy with all the traveling and finishing the book, so that's my story and I'm stickin' to it. So here's my vagueish recap of Anime Central 2016

Doing Something A Little Different

This year was a little different than my usual. I'm typically in the Artist Alley selling my artwork, but I decided to take this year "off" as I configure my comics and personal artwork to improve/change the booth. I also find that taking a year off every once in a while and actually experiencing the convention kind of gives me (as an artist) an insider view of what the crowds are like and what they're looking for.

Since I didn't have the luxury of getting to check in at the Artist Alley reg area this year, I had to buy a badge like a plebeian. (I kid, I kid.) So naturally, being afraid of linecon I had them mail out my badge, which worked like a charm and apparently so did a ton of other people. So this was the waiting line before we could enter the dealer hall area on Friday morning: 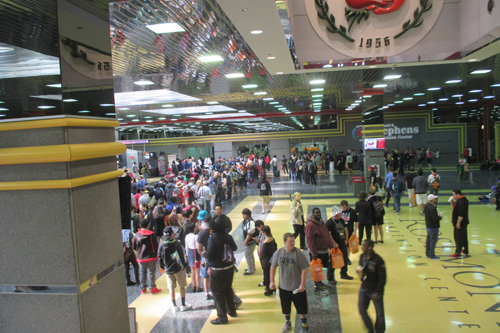 Tons of people, all waiting. And then the gates opened and the flood of people entered! It was kind of magical to be on that side for once. (click on "Read More" for the rest of the entry!)

The dealer hall was massive. Literally massive, and I honestly kept getting lost (thank you Dave for helping me navigate). Not because the aisles were laid out poorly, no no, it was just so HUGE and I'm not used to it. (remember I'm usually behind a booth!) 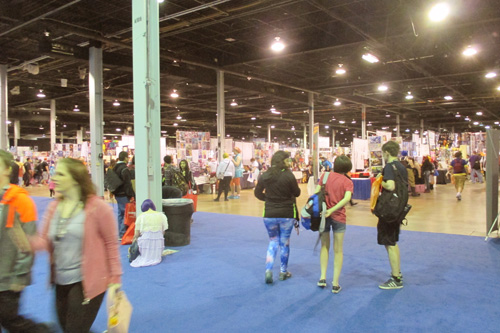 Upon entering there's this big blue carpeted area where you have all the big industry booths - Crunchyroll, Viz media, Good Smile, etc. After that blue carpet area (as you can see the end of it in this picture above) was the Artist Alley. Which was ENORMOUS. I think it had more artists than I'd ever dealt with before in years past, which is great...ish?

As somebody who typically tries to vend in the alley I wanted to give a little bit of feedback as a patron this year. For those not in the know, Anime Central's competition to get into their Artist Alley is ENORMOUS. Like super crazy, and each year the hardworking staff try to come up with new ways to accept artists that's in a fair and equal manner. And every year a ton of artists try to beat the system. Tis the nature of the beast.

Which lead them to this years method: Lottery.

Now, I'm not a huge fan of lotteries when it comes to conventions, but I understand why conventions get to the point of using them. One of the biggest competitive conventions I tried to apply for was SPX which has so many entries lottery is the only fair way these days. Long story short is, I get it.

Previous years have been pseudo first come/first serve/jury combos (which I'm usually the most fond of) and trying to keep their ratio of artists types to be equally distributed. Apparently that's what they were aiming for with the lottery, but.... in my opinion it fell a little short.


DISCLAIMER: I thought all the art that was at the show was lovely. This is not a critique against the artists at all. They all work hard (I know!), and they all have their own merits and abilities. Everybody's booths were on point for the style that pervaded throughout the show. These are my general critiques of the nature of the Alley itself.

+So Many Artists! The alley itself was so big, it was kind of uplifting to see so many people expressing themselves with art and trying to get themselves out there.

+Easy to Navigate Rows! YES PLZ. Keep this up. Anime Central switched to rows a couple of years ago and I've been eternally grateful. I find the island set up gets attendees (and artists) lost finding tables.

WHAT I WASN'T FOND OF

- So Many Artists! Yes. It's both a positive and a negative. I honestly couldn't find a lot of feedback from the AA facebook group I'm on (or I've forgotten it by now, which is also entirely possible). But I am honestly curious as to if we became oversaturated with artists? It almost seemed too massive at points. But I blame my next "thing I wasn't fond of".

- Homogeny. I'm not gonna blame the artists entirely for this (I'm considering them collateral damage really). I'm going to blame the fact that Artist Alley business has become just that: a business, and now there are huge FB groups which talk and converse. People can see what others are doing, others are creating, and what's "popular". But there was something that bothered me.

All the tables looked the same.

And I'm a person who prides themselves on picking out varieties in art (even tiny minor ones) with ease. But as I walked the aisles, I walked past booth after booth, and there were about 4-5 major types of artwork (and I started to wonder if there were a few really popular tutorials that people started to learn to draw with and now it's just integrated into their style), mostly prints (3-D was hard to find), and the printed objects were also the same.

Booths were typically set up as a pseudo puppet theater style (pvc pipe edge, prints dangling), and most people had a combination of the following: Prints, Plastic Printed Charms, Printed Zipper Bags, Pins. Obviously there were a smattering of notebooks, bookmarks, etc. But honestly everybody was selling a similar product just with different pictures on it. And I'll be honest.

I don't know if this is just due to the over-saturation of people trying to sell artwork (I'm blaming terrible economy on this), or thinking that the only way to "make it" is to do what the popular people are selling. All these items are TOTALLY neat on their own! I've purchased a few neat charms, and I'm still debating on what bag I'd want to carry my pens in, and I love prints.

But enough about that. I just want to stress that all the artwork was definitely beautiful! It just all felt... the same.

~ Go Back to Partial Jury. I know it's a ton of extra effort, and honestly I'll pay a little more to make sure that the alley gets to remain a nice diverse area of types of artwork. Which leads me to my next point:

~Raise that Price. Obviously people love Anime Central because it's a big money maker. We're getting a crazy number of entries and only so many tables. (at least 200% entries to tables). I think it's time for a price hike. At least a little bit. Anime Central is so big it's not really a "beginner" convention like it was in 2005.

~Add a "Pro Row". Okay, this is actually based on another gripe I sometimes have. If you are needing two booth spaces in the AA you obviously have outgrown the regular sized table. I'd love to see the addition of a "Pro Row" giving slightly more booth space (almost like an amateur vendor booth but not as big?).

~Artists: Don't Give Into Popularity. Sure having a few things that are recognizable are great! Like charms or prints. But design your booth to flatter your art, not to mimic what's the "most effective" because then everybody looks the "most effective" and nobody is. Sell your personality through your booth! It's like your own little house. Get creative!


Holographic Film Prints
They are a Privilege, Not a Right.


Seriously y'all. Not EVERYTHING needs to have glitter foil. It's cool when used appropriately. Makes me cross-eyed when put on EVERYTHING.

*coughs* NOW, BACK TO THE SHOW!

All the Other Stuff!

My three days were pretty fun. I wandered a lot, got to go to a lot of panels, and got to float around in armor all day on Saturday. My ankle/foot was trying to die (I blame a lot of the cement floors and me not walking a lot usually), but I had a pretty good time.

For those who don't know, there are a LOT of people who go to this show now. It takes place in like 3 hotels and the convention center, and thank goodness for the police acting as a crosswalk for us.

So ACen has a game room that was down in the Hyatt, and it was pretty neat! I got to stop by but it was super busy so not much gaming was to be had. I did get to do a little bit of DDR as Tex, so that was fun and I accomplished that goal for the day.

OMG. Please bring these back next year. They instituted a few food trucks out in the back for the Hyatt this year as a test and they were wildly popular. It also helped in mitigating the traffic at the Expoteria and I got to try new foods! Also, I love food trucks.

Speaking of food, the Hyatt hotel (the main towered one the con started at), offered a neat selection of cooked meals for purchase as opposed to having like the hotel restaurant open. The food offered was pretty great and I enjoyed partaking of it! I dunno when they started that either, but man it was tasty!

So Dave and I tried to attend the Crystal Ball they held at Anime Central a handful of years ago and ... it was kind of lackluster. However, since we were just attending we thought we'd give it a go again because why not?

WE WERE SO GLAD WE DID. We brought out our nicest dresses and business wear and got ourselves ready to go. And with the blessings of the staff we got to wear a little something "extra": 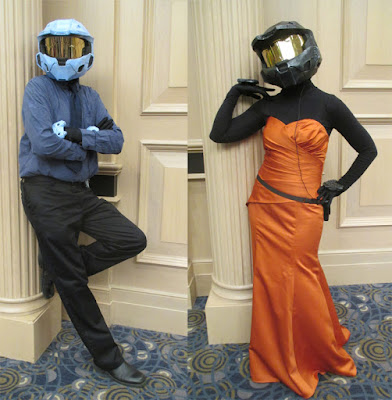 Because we are silly people, we thought "Why not go to the ball as Church and Tex?". And man they were a hit. So look for us next year - I'm workin on getting a baby blue suit for Church to wear and me a sparkly black dress for Tex. Because that's how the Husband and I roll. WHY BE NORMAL WHEN YOU CAN BE SPARTANS??

So anyway, my praises for the dance are tenfold. The room was beautifully decorated somewhere between wedding and prom, lots of seating and a huge dancing area. There were some lovely dance teachers that taught us some basic ballroom before the dancing started, which was quite handy. Also the DJ was ON POINT and played great music. Everything was danceable and a fun time!

One cool thing they had was a photographer person. I figured maybe it was some random person from the convention doing photos. NOPE. It was like a Wedding Photographer level photographer and about a couple of weeks after they show, they released the whole set of photos they took. They are WONDERFUL and it's like having the Wedding Dance photos I didn't have cause we didn't have a dancing reception.

We left on Sunday night and MAN I was exhausted. I had a great time visiting, but I hope to maybe get back to vending next year. I kinda missed having my table!

But props to ACEN - I had a great time! You just keep getting better, so KEEP UP THE GOOD WORK.
Posted by Karmada