Wow, so I can't believe I forgot to write about this. It's obviously been several months since the show, so I'll try to piece together what I can. Hence the "Retro-Recap" title.

Firstly, I was choosing to just "visit" this particular convention this year due to personal disagreeances about artist alley things (and my bad experience the previous year, I figured I just needed some "space" from it).

I ended up doing mostly photoshoots and ended up competing in the Masquerade again this year - mostly to have something to do.

So if you recall, in my post a handful of years ago (3-4...?) I had a rather... unfortunate experience in the masquerade so I was hesitant to try again. I was convinced it was gonna just be fun and derp, and honestly we wanted to give them a good skit in their show - the last time we did a masq there were at most 3 skits (that was back with the Lost Odyssey Skit).

Little did I know how much had changed!

First was our judging that occurred that Saturday. Our music drive was running late (we left it back in the room and had to send a runner) and the staff worked with us and let other people get judged ahead of us, so that was very nice of them.

Second were the judges themselves. THEY WERE SO LOVELY. They were all very enthusiastic and knowledgeable about cosplay and craftsmanship. Looking under seams, inside my cuffs and all sorts of other things! They looked at my references, and asked all sorts of lovely questions, I honestly felt like I gave it a good try and they believed me, even though once again, my costume was more block colors and not too crazy of details (unless you count the triangle edge of my skirt). Honest, smart questions are the fastest way to win me over to a judge.

Third was the competition itself. We probably had about 10ish or more skits for the show, and they were all so AMAZING. It's like they took what they saw a couple of years ago when it was just three of us up there and ramped it up.

I was getting the jitters, but there was a lot of space in the greenroom so I did a lot of practicing. 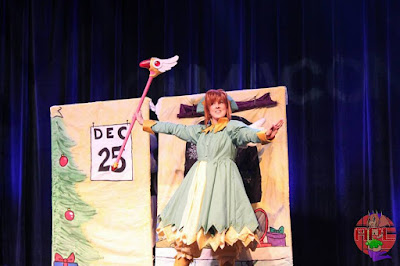 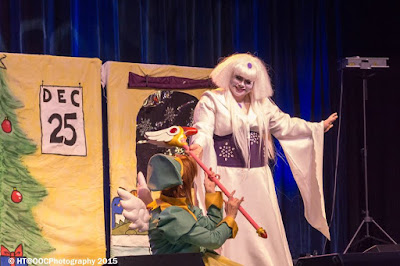 Turns out all that practicing was worth it, because we ended up taking Best In Show at the masq, and honestly, I was freaking flattered as all get out. There were so many good skits, so many good costumes, I didn't know WHO was going to win.

I would have been happy for ANY body who won that show - y'all were amazing. I'm very pleased by the amount of talent that was on display that night.

Also: JUDGES. YOU KEEP BEING AMAZING. You were lovely.

...I also now have a 6-foot tall trophy I'm not sure what to do with... We maaaay have used it as our temporary Christmas tree this year due to moving and not having a ton of space yet?

For proper photos of our costumes you can check them out here: Karmada Cosplay

We also debuted our other set of armor at this show (Dave finished it for the Halloween party at his work ohhohohoho). He followed me around on Saturday protecting me in his ...er.... scary? armor.


I managed to snag a photoshoot on Sunday as well for both of us in armor, and gosh they turned out great. You can see them all at Karmada Cosplay's Photo Album, but here's a preview:

And that's about all I can remember from about 5-6 months out, but there wasn't much for me to report on as it was mostly wandering and photo-ing at this show. :)
Posted by Karmada