Just a quick update, and then I'll have some more updates either this week or next, depending on how my personal schedule works out - but until then, here, have some interesting things!

The Big!Project is coming along, however - November is my final crunch month, so I'll be quieter on a lot of fronts until I've got it mostly completed. Then hopefully I can finally talk about it here!

First thing to announce was this past weekend I was out at Youmacon and performed in their masquerade as Cardcaptor Sakura, along with a Snow Card in the skit "A Very Cardcaptor Christmas". We ended up getting Best in Show, and I'm still reeling from it. You can check out details at Karmaluna Cosplay! 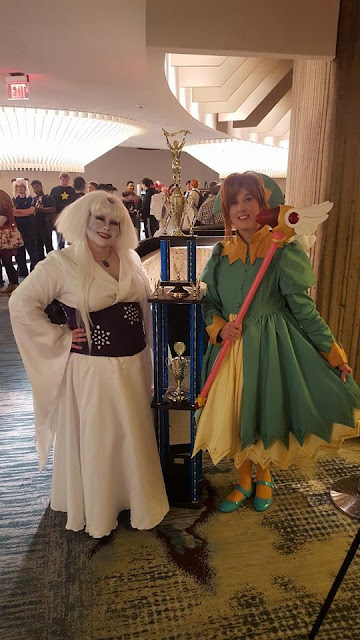 We're still waiting on the video of the masquerade to be released, but I can assure you, it was so cute you might have gotten cavities.

I had a blast, and I was super proud of my costume as well as my prop.

Thankfully I took a bunch of pics of the prop while I made it, so hopefully I'll have a Pseudo-Tutorial for you guys on how I made it. (I had a lot of people ask me on Saturday) It's so HUGE but amazing, and I love it and want to put it on my wall. :)

Secondly, I'll be attending the wedding of my cosplay cohort here over this weekend, so I'm busy packing and preparing (it's a little far away and I'm Matron of Honor), sooooooooooo I'll probably get the post up next week sometime?

After that, it's crunch time on big project, but after that I get to rest! :) And return to posting things!
Posted by Karmada