If you follow my facebook page (karmada cosplay), you probably already saw these pictures come by, but I finally got some good pics of that armor set I talked about like, what, a bazillion years ago?

Okay, it was actually about a month ago. BUT I DIGRESS.

I now present to you proper pictures of AGENT TEXAS from Red vs Blue.
(and where I babble about how it's made)


It took us two solid months of work, but we finally made it (as you saw in the previous GenCon post)! However, you might remember me griping about my visor. We ended up having to hobo one up in a day because the place we took it to wasn't working out so well for us.

I did some snooping around tutorials and forums and things, and I finally found a good resource that linked all the supplies they used to make their own visors (albeit for Mandalorian helmets, but hey, technique's similar enough).

Using that info, I ordered and whipped up a new visor - just in time for a little show that happened over the next weekend called Random Battle Con (I'll talk more about that in my next post). Packed up all the gear, and headed out with Husband to the show.

The show ended up being smaller than originally planned, so we found some extra space in the parking garage that would give us a nice sort of industrial feel for photos.So here's a little view of some of the pics, you can find the rest of them on the cosplay page in the Gallery.

I can babble a little bit more about how the suit was made. All the armor pieces were constructed using a Pepakura pattern (paper folding, for those uninitiated) that some wonderful person went through and edited so it could be used with thick EVA foam instead of paper folding. If you want the names, let me know - I can hound husband for them.

The entire suit is made out of EVA foam - those thick floormats that look like puzzle pieces! We used the pattern and cut out all the parts using a very very handy hotknife. If you are ever contemplating working in foam. HOT KNIFE. PLEASE USE. Your life will be 200% better when you do.

The pieces are then held together with hot glue from a hi-temp hotglue gun - it's a biggie one too. We used the extra long glue sticks as well, because.... well a lot of glue went into this. We joke that we spent more on glue than we did foam. It also means I need to watch out and make sure I don't leave it in a hot car for too long!

By utilizing the EVA foam, the entire suit weighs practically nothing. It's the glue that provides most of the weight, to be fair. This is very good for me, because along with my tendonitis I have a terrible constitution score (I'm working on it!), so walking all day in armor could be potentially exhausting for a soul like me.


As for the details on the suit, this is where I ended up doing a lot of the work. Husband did a lot of the underforming of the pieces (he's much better with the 3-D than I am sometimes), but then handed it to me for pretty factor. I actually created many overlays on various parts of the suit to cover up unwanted seam lines, as well as create more visual differences between parts.

I also used a heat tool (for woodburning) to "draw" in all those dark line details you see. Using the pencil shaped tip, I was able to draw directly onto each piece, and since the foam was so thick, it took to it well, and made nice clean lines for me!

Once the armor was formed, we covered each piece in 5 layers of white glue (Elmer's glue, PVA glue, it goes by many names). This provided us a nice smooth surface to do all the painting. We primered each piece and then painted with montana shock black (which is nice, but it takes a LOT of it, as it's more a directed spray. I'm looking for better alternatives). After that, I took a gunmetal grey craft paint, and one of those hand-sized sea sponge things and gently sponged on the metallic look.

The texture comes from many layers of thinly applied gunmetal paint, and gives a great mottled texture look. (I was going for how the suits were animated in season 10 as it had the most details in it color wise. I mean, the entire suit is BLACK. I wanted to not be a huge black blob in pics).

All the pieces of the suit are held on with snaps we affixed to both the armor and the underclothing. Underneath the armor I am wearing sports compression gear (we found a great deal on some stuff that cheerleaders use and it's GREAT, and breathes wonderfully). Inside of the shoes (space booties as we called them) is actually a pair of sneakers I have E6000 into the inside. I got some of those "extra comfort - long wear" slip on shoes (conveniently also black colored) that people who work on their feet all day wear. It's great because man, conventions are huge.

I also have the convenience of walking on soft floor mats all day, so it's one of the few costumes where my actual feet don't come out too bad at the end of the day.

The visor itself is a thin, bendable plastic with gold window tint applied to it. It's also in two layers glued together to get the neat piecing effect they have in the game. The only thing the visor doesn't do is bubble out as it should. And that's mostly a limit of the materials - as getting gold tint onto a curved bubbled surface is a little... hard without heavy construction tools.

Once I find a way to make one without it having bubbling/fingering issues in the gold, I'm making you all a tutorial. BECAUSE THAT INFORMATION NEEDS TO BE OUT THERE AND I'M WILLING TO SHARE.  Once I make a visor I'm happy with.

In the meanwhile, I will be wearing this suit until it breaks. And then I'll fix it and keep wearing it. Because I love being in it so much, it's so much fun to interact with people in it!

1.) The suit weighs almost nothing. I get a lot of questions about "isn't that heavy" or the like. Because it's made entirely of foam, I can hardly feel weight of any of it, except maybe the helmet (it's on my head) and the feet (because there's sneakers inside it). I want to make all armor out of EVA foam now, it's so wonderful.

2.) I get too cold more often than too hot. That's right. Unless I'm doing heavy athletic movement in the gear, I actually have the tendency to get cold instead of hot. This is because underneath I'm wearing compression gear designed to wick sweat away from the body to cool you down. Which is great because I wore this during GenCon when it was 95 degrees outside, and I did pretty well. Inside the A/C rooms though... I was shivering!

3.) I can actually move in the armor properly. I actually took a short jog in it, just to test it. And in a stroke of hilarity, I actually also managed to play DDR (dance dance revolution) at Random Battle Con to see if I could. I even set it to the difficulty level I'm used to and managed a B score or more on the songs! My camera's not real good at action shots, but here's me playing the game at RBC: 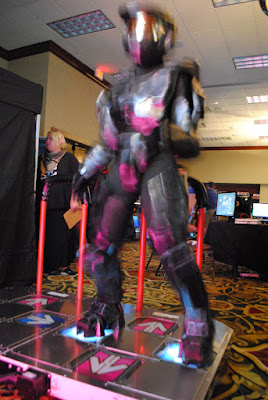 Also, I saw some people were recording me dancing. If anybody finds the vids of that, PLEASE send me a link. I didn't think of having husband actually record it while I danced....

This is not only a testament to proper armor making as a cosplayer, but the person who designed the suit for the videogames really understood how bodies moved and worked, because I have an almost full range of movement and this was just our first set we've made. So thank you, armor designer!

4.) Phantom Armor Abounds. Okay, so it's really weird, like, if you wear a hat all day, and then take it off, it still feels like you're wearing a hat right? Well I get that with the armor. I still feel it on my limbs n stuff hours after taking it off. Husband laughs at me, but I'll have the last laugh when HE GETS IT TOO.

And to end the post, a funny picture! (featuring old visor!)