This past weekend,I got to be a part of a surprise birthday party for a friend of mine, and the theme was Disney (of course!). As attendees we were all encouraged to dress up as a Disney character of some kind (yes, I did dress up, you shouldn't really be all that shocked here).

While the party had a general Disney theme, the movie Beauty & the Beast happened to be the movie du jour, as it also is the favorite movie of the Birthday person! So we transformed a friend's house to having a "ballroom" and featured all sorts of lovely goodies to eat based on the movie.

Yes. They had grey stuff. I hear it was delicious!

ANYWAY, as the main gift, the coordinators commissioned a fantastic Belle gown (the yellow one from the movie), and during the planning phases I thought it'd be cool if I could construct a prop to go with her outfit! And NOW I can finally show you what I made. :)

I decided to make the Enchanted Mirror from the movie!

The mirror itself ended up being like a foot & half long (approximately, I honestly didn't measure the darn thing), and pretty darn sturdy. It had to be, I went through two mirrors before this (the mirror had cracked - and yes, we're counting them as cancelling out the bad luck on each other!), and then realized it was probably going to be taken to conventions so a new method needed to be used.

So the "mirror" part of the prop is actually a 0.25" thick piece of clear plastic with a mirror sheen sprayed onto the back of it. That way it's "kind of" reflective. I mean, you can sort of see your face in it, but I wouldn't recommend doing your makeup with it. Also a bonus, that way you can't get weird reflections in it if anybody takes a picture with the front part facing them! And if shouldn't crack like the glass mirrors did...

The mirror is designed to be life-sized, and I actually covered the whole thing in Worbla. Don't worry, I'll have a separate post where I show some of the stuff I did. (I'm never making one again! Unless lots of money is involved....) 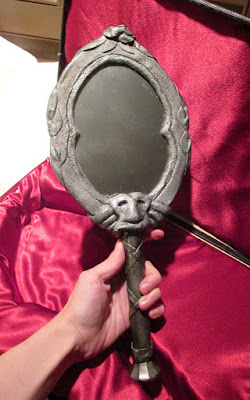 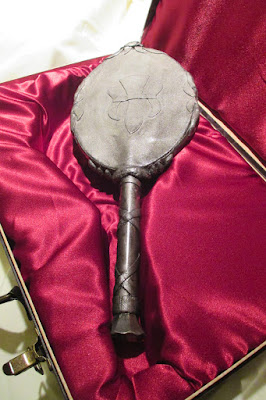 The mirror is coated in a silver spraypaint, that I then drybrushed with a gunmetal grey silver over the top, and finished with a black wash to get all the details to show, as well as give it that "weathered" look. I was hoping to make it look like an old metal mirror (much like it'd be in the movie).

Lastly, the mirror is clear coated in a UV resistant gloss, to prevent chipping and damage when holding it. Conventions, amirite?

SPEAKING of conventions, it had come to me (of course at the last minute *le sigh*), that the Recipient would probably want to bring the prop to conventions, and I don't think they'd have a good way to transport it. Honestly, a common problem for most props...

So I decided to make it a travel carrying case, which also conveniently doubled as a fancy birthday wrapping and display! I went to Michael's and got one of those decorative boxes with a handle and latches on it (needs to be easily carryable!), and bought some 2" foam from Joann's (egads, use a coupon, that crap's expensive!) along with some nice inexpensive satin.

I used two layers of foam for the bottom half of the box, and trimmed down the top half so it'd close. The satin was gently placed over the foam, and held down with hi-temp hot glue. Same with putting it in the box itself - it's just hot glued in, but it sticks really well to both surfaces, and both sides of the foam meet so the mirror doesn't bounce around either.

Needless to say, the gift was a success! I'm sad to see it go, but I'm glad it's in good hands.

PS. Before you ask, no I'm not making one of these again unless lots of money is involved. You'll see why when I post the "making of" later this week...