It's only the beginning of the year and I'm already playing catch-up! Woo! But that won't stop me, because I wanted to talk to you all about my experiences at Katsucon 2015!

I vended there two years ago, as well as visited for WCS preliminaries (which was a lot of crazy fun). I didn't make it into the alley for 2014 - it was juried and I just didn't end up making the cut - but it all worked out because that was the year it got snowed in and I wouldn't have been able to drive out there anyway. :P

So in lieu of causing another snowstorm, I made the cut and made it back to Katsu!

Apparently Ohio still had it out for us, and instead of whiteknuckling it through the mountains, Dave made sure that I was good and tired, so we left around 3 am. I promptly fell asleep until halfway through Ohio to when I was awoken by sudden whiteout conditions. WTF OHIO. STAHP. Thankfully it cleared up after Clevelandish, and we made our way through the rest of the states with not too much of an issue. (Though PA turnpike, why you so expensive!)

Checked into the hotel (we stayed at a local Red Roof Inn +, which honestly was pretty nice, and not too expensive, I would definitely stay there again), and discovered our car had changed colors. It was WHITE. Our car is BLUE. (and no, this isn't a reference to the Dress Meme). Our car had been coated in a thick layer of salt (to which I blame OHIO for), and it took us some time to find a car wash to return our vehicle to a sane color.


Once all that hoopla was out of the way, it was time to head to the convention center and find out where to set up. I do enjoy Katsucon, but I have to admit, it feels like the Defense Against the Dark Arts of conventions because I think every year there's a new person in charge? But nonetheless I aimed to be pleasant and willing to work with whatever we were given.

After all, there was a bit of a snafu that happened JUST before the show where they realized they had double booked our room with another event, and we'd have to be out of the room by 3 pm. Thus making our selling hours from 10 - 1 pm. 3 hours to sell, during the time everybody's checking out anyway. We were displeased (mostly because we found out backhandedly through blogposts, NOT via mass email), and they did their best to get us a new space for full hours. AND THEY DID! (yes we can all gasp in shock). I entered, and went to the place where my booth was to be... and I found out I was now facing a wall.

I was crushed. After some pretty dismal events prior to this, it was hard to keep spirits up, but thank goodness for Dave. We still set up the table, met our nice neighbors (it's so nice to have neighbors who will actually TALK to you...), and then headed home to rest/cut prints.

Then the convention started. And ALL my fears were squashed immediately. Sure, we were facing a wall, but the aisle was huge, and it happened to be on the side where the entrance was. There's a lot of people who come down that way first, and many a times that weekend were were inundated with people. So much so, that I hardly had time to take pictures. I did a record number of commissions (I'm gonna try to not do that many next time), and overall it was very successful.

I can see why the artists really wanted to have Sunday hours, because it was CRAZY that day. Some shows Sundays can be dead, others have it as the day when everybody finally decides on what they want to buy. We made our way home the next day (after a fun trip to the Container Store!), and finally got to rest. Next year I won't have two shows THAT close that are that FAR away from home...

+ While being a cosplay heavy con, there were still a LOT of people who came to the show, and came specifically into the alley. I'm okay with separate locations for alleys and dealer halls so long as the convention goers KNOW it's there.

+ Staff was very nice. Check in went great, they had all the paperwork ready to go, and was very helpful!

+ Venue, as always was beautiful.

+ Hall was very large! I really enjoy huge alleys because you usually get such an interesting selection of varying kinds of artists. I can do really well or really poorly in a small show (usually dependent on attendee demographics), but at a huge show, I usually do pretty well on average. I also love the variety of people I will see come by, and even though I'm behind a table, I feel like I can get lost in the crowd. (I blame having a huge high school)

- Lack of Adherence to Height Rule. There was a height restriction this year of no more than 4ft (or 4 stacking cubes) high from table height. This really made things a little awkward for me, because my wire grid frames are 5 feet tall. I tweaked the set up and ended up having less display space than usual, but other artists just seemed to disregard that rule. A little miffed about that, but I worked with what I had.

- So many surveys! I think somebody in the alley has a bone to pick about being separate from Dealers. I filled out two major surveys - one when I checked in, and one midday on Saturday, and I'm really hoping the Saturday one was a legit one. Honestly, I think the way the alley is currently works for the convention, and had they asked me when I left I'd say to leave it how it is. After hearing the din/music from the Dealer hall, I was REALLY GLAD there was a wall between us.

- Dem Hours. OH MY GOSH CONVENTIONS. STAHP. PLEASE. I know you want us to be open for people all sorts of hours, but egads, these 12 hour show days are super killer. I did end up staying the whole set of hours (I used it to draw commissions) but I literally had NO time outside of sitting in the alley. I only made it to the dealer hall like twice, once to see a guest I wanted to buy books from on Friday.

~ Try to not overbook the rooms next year? We were kind of shoved to the side down the hall due to the resetting of our location for timing, and I think that bummed a lot of people out.

~ LESS HOURS. Please, can I leave at a decent hour? 12 hours is just too rough, even with a helper.

Would I return? Definitely. I have plans to cut out shows for next year, but I really had a great time at Katsucon, and am certainly considering entering again. It also gives me the chance to take some great cosplay pics in the morning. :) 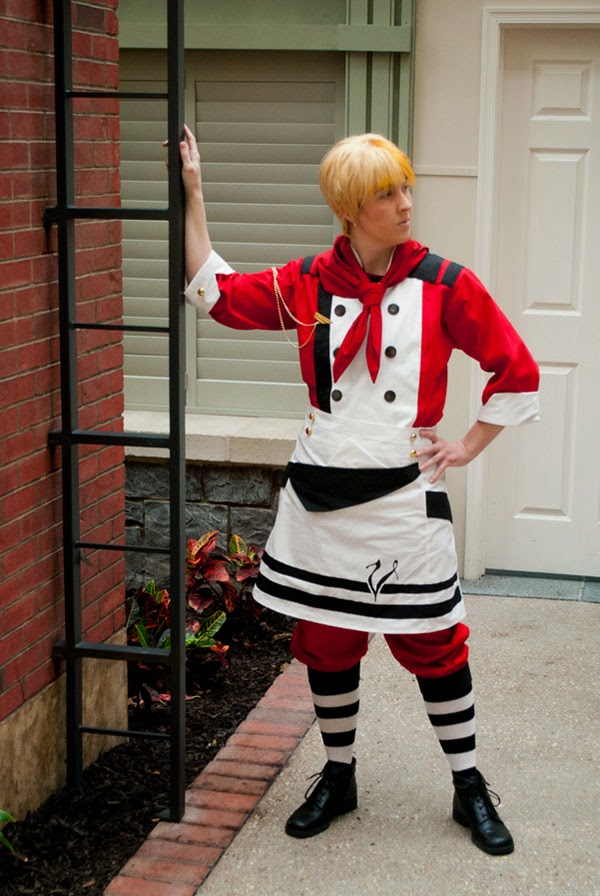