I'm Pretty Sure Ohio Hates Me

I have a Retro Recap of Ohayocon coming up, but I wanted to tell my Tale of Woe from the start of Convention Season.

Since Christmas, it seems like everything's been one disaster after another, and Ohayocon was no different. Sure, there were things like low sales, weird crowds that really brought be down, but not to be outdone by my burning of myself around Christmas, the fates would have it to make even more hilarity happen to us.

You see, at the end of Ohayocon is when the Great Blizzard of 2015 was rolling through Michigan/Midwest. It was supposed to have been more to the south, but we figured that we lucked out by having it go more north. I mean, they'd be way more prepared to handle snow than southern Ohio, right?

That was when I was texting a friend of mine who mentioned that they were already declaring snow emergencies at 2:00 pm that day. Since business was slow near the end of the day on Sunday, we cut our losses and decided to pack up and leave early. Hopefully we could beat out the worst of the snow - it was only a 3.5 hour drive! How bad could it be?

It was like in those movies where when the main character goes "It could be worse!" and then it starts pouring rain.

Things were going well until we started to reach the upper Ohio area - nearing Toledo. The wind was blowing, snow was falling rapidly, and we were like WE'RE MICHIGANDERS, WE CAN HANDLE A LITTLE SNOW.


But then the wind got worse. And the snow got heavier, and plows were nowhere to be seen. At one point the snow was blowing so strongly across we lost ALL vision from the windshield, and our wiper blades began to collect ice due to the severe low temperatures.

I dunno if anybody here watches Top Gear, but the episode they were driving through Siberia.... well... we got to experience it first hand! IT WAS SCARY.

So we made a choice we've never made at a convention or trip before - we needed to stop elsewhere for the night. It's times like this that I'm grateful for smartphone technology, because I quickly pulled up my map of the area, found a relatively inexpensive hotel (that wasn't scary), and gave em a quick dial. They had rooms, thankfully, so we headed that way. 45 minutes of driving later, we arrived in Perrysburg. 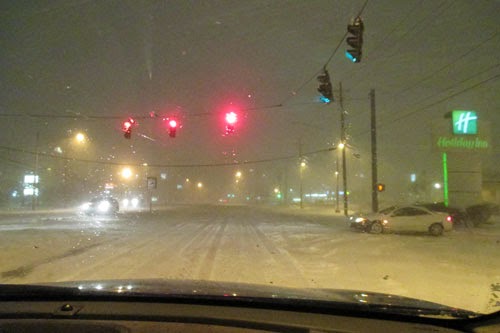 The snow had piled up and was still pretty fiercely blowing around, but we made it to the hotel, and since we hadn't packed anything food-wise other than donuts/snacks, we needed dinner. But that proved to be even more difficult - since it was blizzarding, many places shuttered and sent all the workers home. And because it was a smaller hotel chain, we didn't really have any connected restaurant either. So we went out searching.

...and we found ourselves a gas station.

...and we bought food from a gas station.

...and I ate food purchased at a gas station. Mind you, it was ramen, and all I had to do was add hot water, so it was definitely in the SAFE category, but if you happen to know anything about me, it's the fact that I am indeed a Suburban Princess.

You may as well have said I went camping and cooked and ate fish I caught.

I ended up surviving the ramen cup (even though it was chicken flavor, I prefer beef), and we rested that night. At least we had free wi-fi!

BUT WAIT IT GETS EVEN BETTER.

It was later that evening, that we researched something the Hotel staff had mentioned when we arrived. Something about a number code for weather. That was when we discovered that Ohio has this really weird numbering system for winter weather, and it turned out that the county located JUST above us (we were basically at the county line) was under their maximum level (3). This means that if you were on the roads under a Level 3, you could be pulled over, ticketed, and possibly arrested. WTF OHIO.

...this did explain the cop that watched us leave the gas station that night. He was probably making sure we didn't go into the Level 3 County.

Also, we found that this restriction wouldn't officially be lifted until sometime tomorrow - in theory NOON. We couldn't even legally leave earlier in the morning, and while I enjoy being able to sleep in, I WANTED TO GET HOME.

Once we were free to go, the fun just KEPT HAPPENING. The drive through Toledo was fine, and even all the way up into our local area. Somehow they got all the main roads plowed, so yay? BUT WAIT, THERE'S MORE.

Because we couldn't leave until way late, we didn't get into town until at least 2:30 (dodging some slower roads and people of course). To when we were greeted with the most glorious of snows:

We had a car full of booth, and somehow the apartment complex hadn't gotten to clearing out their lots. And while, yes, I understand that it was one of the worst snows we've had in a while... why didn't they think of removing the snow from unused spots at least? They plowed everything else!

...and since we live at an apartment complex, we have never in our entire stay here have needed a shovel of any kind. But this was like a foot and a half of snow, the size of a parking space, and thus began our quest for a shovel.

To which we discovered that ALL the local stores were preparing for summer, and had NO SHOVELS ANYWHERE. Seriously Michigan, WHAT IS YOUR PROBLEM. What makes you think that we don't have need of things for snow during the month of JANUARY. Instead, they set out all the... grills.

It took another 1.5 hours to find ourselves an actual shovel (the other crews probably came and took all the leftover ones they could find), and much like a few other people in our complex, parked the car in the aisle, and then shoveled out the space. At least we weren't alone!

AT LAST WE WERE HOME.

And that's how I know that Ohio REALLY hates me for some inexplicable reason. :P

Email ThisBlogThis!Share to TwitterShare to FacebookShare to Pinterest
Labels: Adventures in Ohio, In Real Life, Ohio Hates Me, Snow