Well well well, it's been a while, Glass City Con! For those of you who recall the LAST time I went to GCC, it's been a long time. There was the one year they were supposed to run, and then had funding issues, and then they went on hiatus for a year as they got new sponsors and such.

They finally came back this year, and after having a couple of what I'd consider "dud" cons (aka, barely making booth back - though one of those two I'm still interested in vending at), I didn't want to take any more chances. However, knowing that the show is about the same distance to get to Lansing, it was worth a day trip for me to see if it would be a show I'd be interested in in the future. (Reconnaissance, it's good for you!)

After an arduous morning, my friend Kristy, not to be confused with me, Kristie, (hey less names to remember, amirite?!), and I finally arrived at the show. It ended up taking us like 3 hours to get there or some nonsense. Between running late in the morning and then having an ungodly long backup near the border of Michigan, causing us to offroad onto some country roads to make our way there, missing an exit, driving over bridges a lot, BUT WE MADE IT.

As opposed to being a little College convention in a college building, this one was in a little convention center in downtown (I think) Toledo! It was called the Seagate center if I'm remembering and it was pretty cute inside. We headed in, and we were a little worried at first because we didn't see a lot of people.

Then we reached the inner convention area, and weren't so worried anymore. We found the line, and waited for our turn to get a badge. The staff was on the ball as there weren't a lot of pre-regs who needed to get in, soooooo they started taking all the regular people, which is great because we got through really fast. 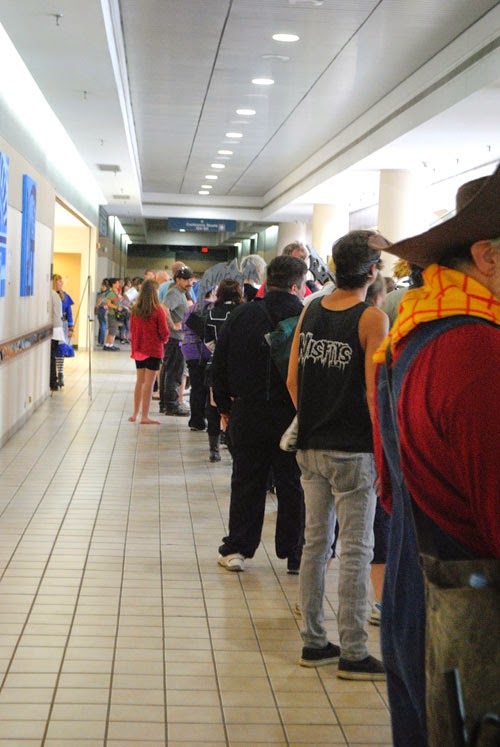 Seeing as how we got there at like, noon, we were worried we were late. Turns out the alley didn't open until noon? Bwa? Really? We were confused given that it was only a 2-day convention, but hey, at least we didn't have to wait around for stuff to open. Heading inside, we found the dealers and artists in a big convention-hall space that kind of reminded me a little of Shuto Con's but much smaller? 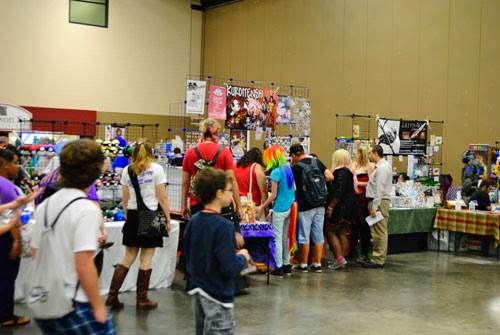 Crowd was generally laid back, and wasn't too crazy for me (I get nervous if I have to deal with a lot of people and I don't have a table to hide behind!). We saw some pretty neat cosplays, but of course, here was one of my personal favorites:

I believe they were dressed from halo? And the little gal was absolutely adorable and so calm for having her face covered! She walked around that show like a BOSS.

My Cosplay pal, LunaLadyofLight was assisting with the Costume Contest at the show so I peeked in and said hello, as well as stopping by a panel being run by "And Sewing is Half the Battle" to say hi to them as well!

Speaking of cosplay, I had made one the day before - mostly because I'm running out of stuff that fits (means I need to run more or SOMETHING), and I lost all my accessories on the one outfit I WAS going to wear. So I went as a Casual!Madoka in a pink Yukata. XD Yep. Made me another kimono because WHY NOT.

After perusing the show for a good chunk of the day, Kristy and I did some photos and then we went and saw the Masquerade, which was short as we expected it to be.

I did have one major complaint about the Masquerade though - the halftime show. What is it with cons and their halftime entertainment being a bit... how shall we say... inappropriate for the age of the audience? This time we got a pseduo burlesquey kind of dance by a gal who was very pretty, but basically was doing lots of shimmying, skirt flipping, and bust views during the whole thing. I don't mind it if it's an older audience, or a show that's specifically indicated for teens and up, but seriously, there are KIDS at these things. Whyyyyyyyyyyyyy.

After the show we stopped by to have dinner with ASiHtB, to which we went and had some delicious pizza (albeit it took us like 3 hours to get it due to the computer apparently "losing" our order? But we got a free pizza out of the deal by accident? So yay?). Found out I'm apparently sort of internet famous for that little Sailor Moon propaganda poster I made a while back, and made the day of one of the gals with us at dinner.

Then, as the day was ending, very very late, my pal and I headed home, and goodness gracious if I wasn't dead for the entirety of Sunday. I slept like 2/3rds of the day. I felt like I had been hit by a truck or something (which is why, for those keeping score, I didn't update my comic monday. I was DEAD.)

Anyway, that was about it.

Good: It looks like it has potential to be a bigger show, a decent amount of attendees, artist area was pretty well-sized. Staff seemed knowledgeable, everybody seemed pretty happy to be there.

Would I Vend Next Year? Still on my maybe list. I gotta talk to some of the other people who vended at the show to get their take.
Posted by Karmada