Dashcon - A Lesson We Could All Learn From: AKA "How I Stopped Worrying and Learned to Love the Ball Pit"

So I don't know if the rest of my readers here keep up with latest convention information, but quite a debacle went down this past weekend in July.

There was this little show going on in Illinois called "Dashcon". The name had appeared in my tumblr feed a few times, as well as through artist circles, so I figured I'd check out their website. Site looked slick, but the premise for the show was dubious at best. This "convention" was set to be a "tumblr convention" wherein all different tumblr users could meet in person and finally see each other in meatspace as well as share in their fandoms, artwork, and more.

Seems legit, right? Well, that is unless you know Tumblr. I definitely have a very love/hate relationship with tumblr. It's great for WIP shots, promotional stuff, and getting artwork out, but it's also writhing with crazed fandoms, less than savory pictures (usually NSFW, thank you people who tag those), and tons of "Social Justice Warriors".

It can honestly be a very tiring place, and it's taken me a while to even pare down my tumblr feed so I don't get depressed on a daily basis. BUT I DIGRESS.

Around two months ago, they posted their "panel listing", to which I opened it up with a group of friends, and even just SEEING the titles of the panels, the show became a big NOPE to me. A lot of the "panels" focused on strange topics like "tumblr speak" all the way to ones obsessing over stuff like "British Men With Cheekbones". Needless to say, it was a huge red flag.

The show claimed that they were going to have some pretty big tumblr guests as well as "Welcome to NightVale" doing a Q&A and a reading of their podcast shows. Totally legit, right? 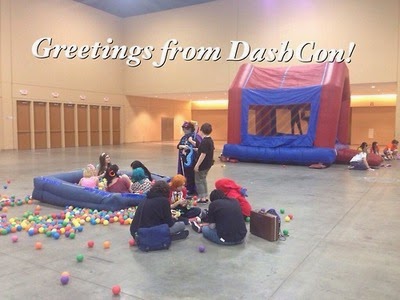 Well, as the weekend progressed, I discovered just how badly designed and organized this poor show had been. Thank you internet for keeping me up to date on this!

1.) According to the convention, the hotel was going to toss out the convention on Friday night if they didn't come up with the full amount to cover the show, equaling about $17,000 (they already apparently had $3000 on hand because the total was $20,000). They managed to raise this money within hours. Queue tumblr memes of "what $17,000 can buy you.

This is still under investigation - and rumor have been flying like crazy. Namely - was this a scam? Did the hotel re-neg on their original contract? How did they get the paypal money immediately to the show? (It takes 3-5 business days to transfer the money) Will contributors be refunded after the show is paid off with entrance fees and the like?

Did the hotel make it up because they were "weirded out" by the con goers? (According to some accounts, this hotel had never actually held a convention like this and were taken aback by the weird people in costumes), or was the convention staff trying to get extra money they knew they wouldn't get otherwise? NOBODY KNOWS YET.

I'm still waiting to find out more details. Honestly, because I'm worried about the poor people who contributed a lot of money and tried to make this an honest thing.

3.) Guests began disappearing after it became apparent that they were not going to get paid. NightVale even had to pull out (understandably so), but attendees who paid for an extra ticket were not told until hours after the start time and no show. They were then given the option of having "One Extra Hour in the Ball Pit"

4.) Speaking of the ball pit... Yes. They had a room with an inflatable bounce house and a ball pit (I don't understand why cons do this - other ones have, and they've been kind of impressive, but honestly, I don't get it. Maybe I'm too old.). But this one? This one spawned it's OWN memes.

At some point it apparently sprung holes and deflated. So they had to patch it up.

5.) After checking out a personal account of a former committee member, I came to the conclusion that the people who decided to organize this show had never actually worked at a convention, let alone thought about how they're actually run. Apparently the committees were based on "fandoms" (superwholock, vampire diaries, etc), rather than... say... departments. You know, things like "guest relations" and "vendors".

Honestly the whole thing was a hot mess. I hope that we can all learn from this event on "what not to do when running a show". I'm almost more embarrassed for this convention than the AkiCon disaster the other year (where all the artists and vendors were located in a leaky, cold garage with no heat).

My condolences go out to anybody who may have gone out with the intention of having a good time, but getting kinda shafted in a way. Those who had fun, I'm glad you did, but don't think this is how shows are run, please!

At least we got some good memes out of it, right?

If you'd like more COMPREHENSIVE coverage of this event and the disasters that went down, I'd STRONGLY suggest checking out the links below.

Email ThisBlogThis!Share to TwitterShare to FacebookShare to Pinterest
Labels: Convention Combustion, dashcon, How NOT to Convention