Anime Park is a small one day convention held at my old high school campus. I heard about it at another convention, and I figured, WHY NOT? I mean, it's my old school, and it's within a short drive, sooooo why not help out? I've been with them ever since.

This year we returned to the illustrious Canton building.


They had all of us set up in the cafeteria, which we did well in anticipating and brought SEAT CUSHIONS, because let me tell you, sitting on these lunch table seats is IMPOSSIBLE for more than an hour.

We arrived very early in the morning, okay, early for me, and got ourselves set up so we could vend until 6, which gave us like a good 9-10 hours worth of selling. Not bad!

Venue is obviously a high school, so smaller items tend to work better at these kinds of events, and I had a lot of people stop by for either small prints or commissions, and hey, I'm totally cool with that!

I hardly left the table much all day, and Dave lovingly went and fetched us all lunch. And a new cutty tool for my table (as the other one is dead/missing). Had a great time, sold well, will try to be back next year!

ENJOYED IT! Would vend again 10/10.
Posted by Karmada No comments:

Now that I have a few days downtime, it's time I got caught up on some recaps. They'll probably be a tad shorter than I had originally planned - mostly because it's been a couple of weeks send I attended the show. I will post as much as I can remember!

First up, I have MIDWEST MEDIA EXPO

I attended this show as an artist in their alley. This was the first year for MMX, so naturally I was pretty flexible with WHATEVER they'd end up doing. Honestly, with the bumps in their webpage and media pages, I didn't have a huge amount of expectations.

I did hear there was set up available on Thursday night, so knowing that there's a 99% chance this hall will be first-come-first-served, my artist pal and I headed up to the Ren Cen to check it out. It was rather quiet/dead there, but I wasn't entirely shocked by this either. We were pointed in the direction of the fellow in charge, and were told to just "go upstairs and pick a table you want". We shrugged, and went upstairs.

The alley area itself was much more sparse than Youmacons past - it was on the open area in the 4th floor surrounding the main events doors. Our tables faced outwards into the center, and we were along the outside wall (not the side with the open view of the ground, but actually the wall). 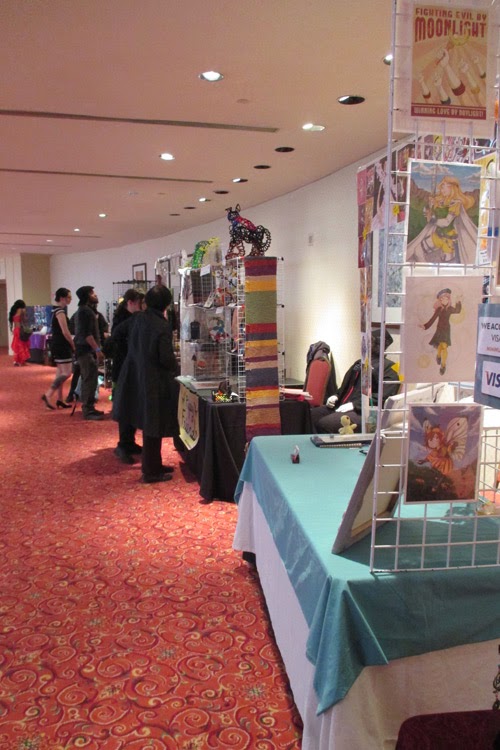 There was a ton of room in front of us, which I didn't entirely mind (if I'm up against a wall, and have tons of people in front of me, I get really antsy (aka, I get pretty bad anxiety/claustrophobia and have to hide under the table until healed).

Overall, the crowd was relatively thin - but then again the show was spread out over a large area. There wasn't a TON of stuff for people to do just yet, seeing as how it's kind of feeling the waters with the first year. But I did a decent business at the booth, and got to meet a lot of people. The crowd was a lot different than the usual Anime Conventions, and I think with time I could be a real contender in cons like this (let's hope PopCon goes as well!).

One of my big sellers over the weekend was my drawn commissions: 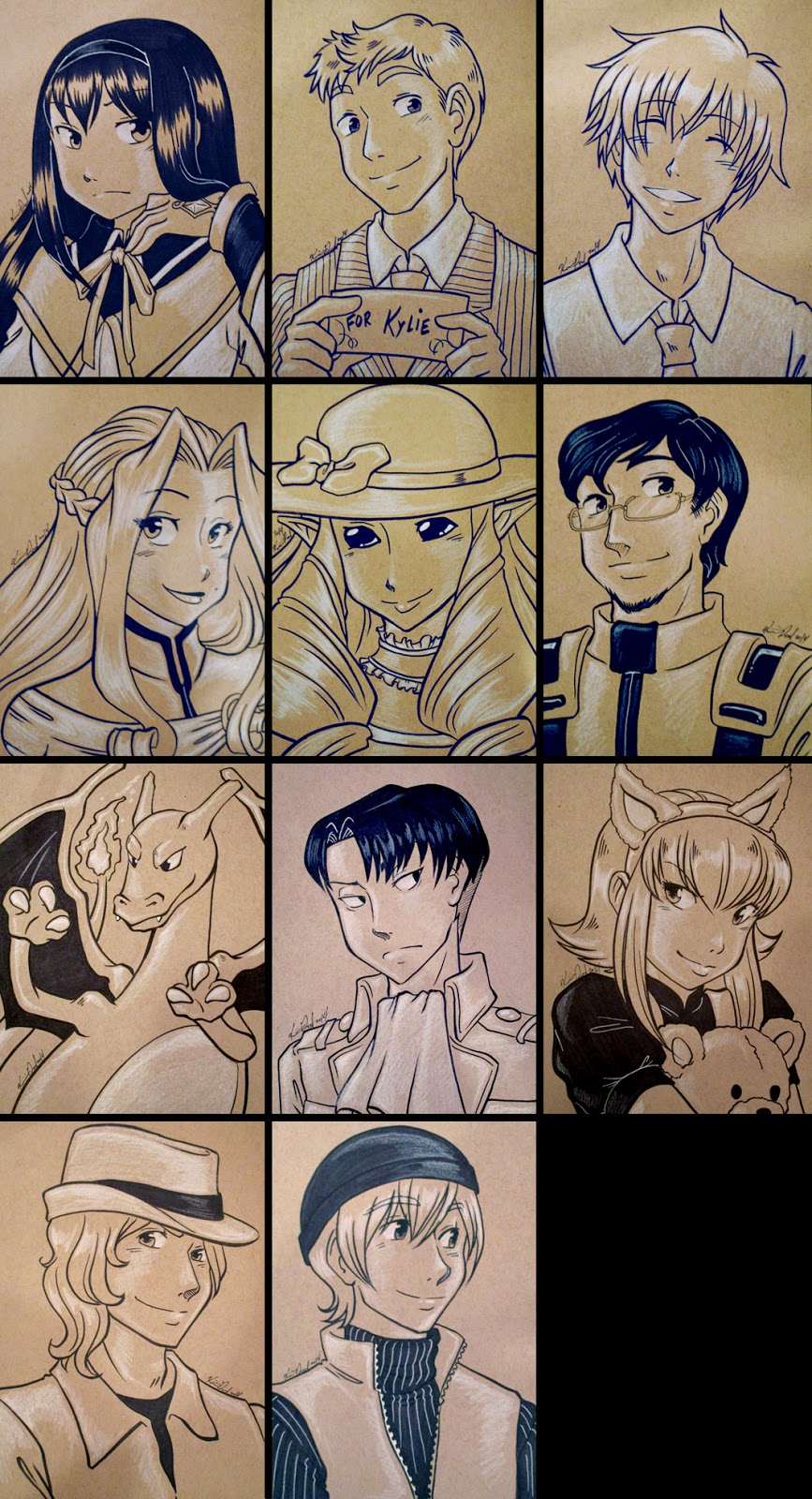 I think this is all of them? They were at least the ones I had an image of on my memory card? Either way, lots of drawings to keep me busy over the weekend (I actually closed commissions come Sunday because I had a lot to prepare for next!).

Over the weekend I showed my artist friend all of Madoka Magica, so that was a plus (we were staying at my place since it was so close to the show)! Got her hooked. :) ONE OF US, ONE OF US. *coughs*

In the end I was relatively successful at MMX. This is good. The show itself felt desolate and confused. The patrons were an ...interesting bunch to say the least, and they were crowds I'm not used to actually dealing with.

The convention itself was pretty flexible and let us set our stuff up on whatever booth we were given, but it kind of felt like the staff was very threadbare. It felt like a convention that forgot it had a convention (or maybe a bunch of people dropped at the last moment), and nobody knew what each other was doing, but they knew they had a con to have so up it went! (This has actually happened at other conventions, so it's not exactly unusual). I hope that they get more staff for next year, and maybe pick a weekend that doesn't coincide with C2E2 (a huge comic/entertainment expo in Chicago).

I did have a bit of a bone to pick with some patrons and other booths - music. Music, music MUSIC. OMG. I think I'll have to end up complaining about this until the end of time - but if you are at a booth, I beg of you, PLEASE DO NOT PLAY MUSIC. I don't care if it's low. Low or loud, it's a distraction, adds to the din of the hall (and they are usually very echo-y), and potentially distracts customers.

This includes recorded music (playing on stereos) as well as live music (you have an instrument and are playing). You might be bored and need the music, but please, don't force the rest of us to listen to your favorite dubstep. (I honestly may make a post about this someday explaining my full feels).

It was okay? I didn't do awful, but the attendance was really low? I'd go again next year if they have it to support it, but I'm glad I live nearby?

Overall it was... okay. I hope to see if it grows in the future - it has potential to be pretty amazing.
Posted by Karmada No comments:

Whew. I'm reaching the home stretch, which is why you haven't seen a lot of me here on the blog. I did a final count and came to the realization I will have done 5 full-sized conventions (4 days, including travel), and 3 of them being out of state a good distance away.

But I continue to trudge along, and bring you the NEXT LOCATION Crash Bang Labs'll be at: 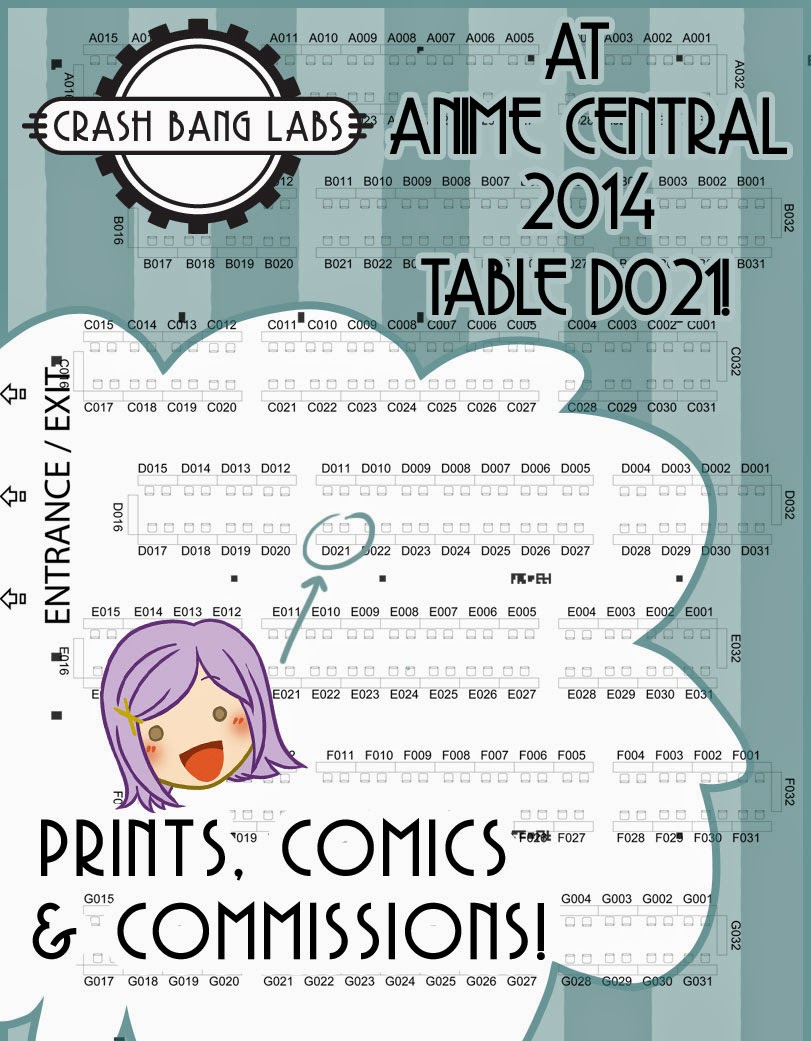 That's right! I'll be in the ACEN artist's alley, inbetween doing WCS things and what not. I should be at my table *most* of the day on Friday, and almost all day on Saturday! Sunday I'll be away due to the competition, but my table cohort will be there to assist with anything you may need! :)

Oh, and just in case you hadn't seen my facebook or tumblr, I have a SPECIAL PRODUCT available starting this weekend: 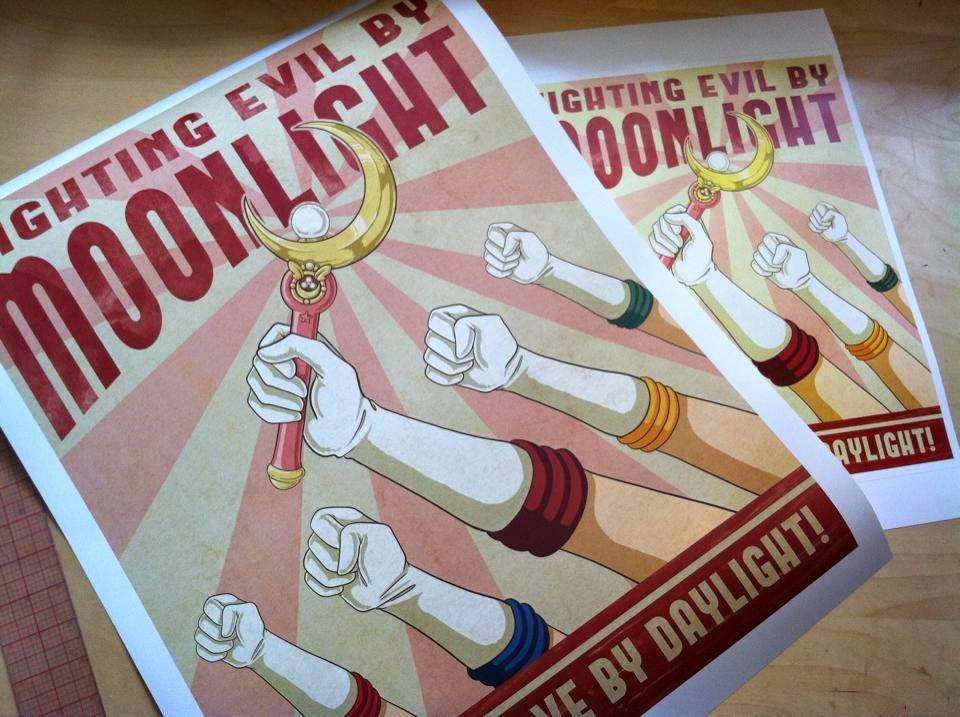 I got my order in just in time! I'll have some EXTRA LARGE versions of the Sailor Moon Propaganda Poster available at the booth - I only have about a dozen, so get em while supplies last! If they sell well, I'll be ordering more for other shows as well as the Etsy shop. Prints are $15.

Now I'm off to go finish getting ready for the show! See you guys on the other side of the weekend!
Posted by Karmada No comments: