April Convention Schedule: AKA Why I won't be posting much, unless I get a recap done quickly!

April's looking to be a rather... full month, so while I'm busy working on projects, I'm gonna tell you what and where I'll be doing things in the upcoming month!


First up is SHUTO CON. It's up in Lansing MI, and I've been vending there since the first year they opened! (I think it's in its... 4 year now? I think? I've lost count of all of these things)  ANYWAY, I'll be there vending in the Artist's Alley under Crash Bang Labs at TABLE U, as well as giving some panels! 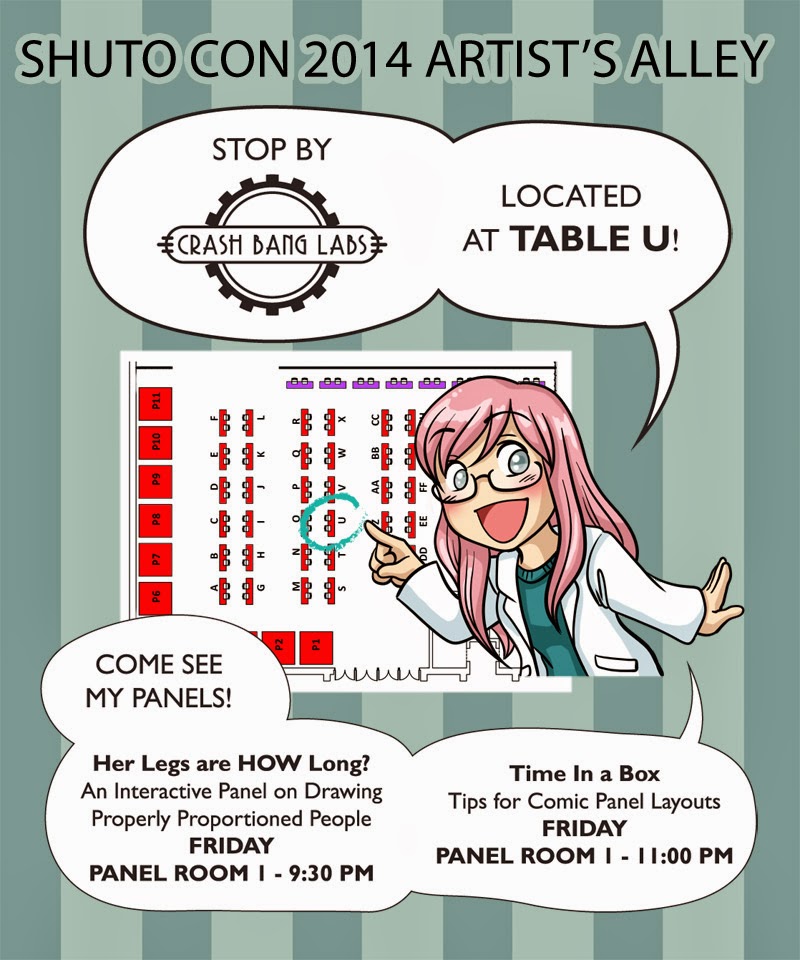 As for my panels, I'm reprising the same ones I did last year, with small edits, and a slightly longer running time (that way I can stop to breathe in between my slides!).


Time in a Box: Tips for Comic Panel Layouts

A picture’s worth a thousand words, but a terrible layout only spells disaster! Join Crash Bang Labs for a discussion panel about Comic Panel layouts and composition. Whether you’re drawing a single comic strip or a full chapter book, the tips and tricks in this panel will help you tell your story your way!


Her Legs are HOW Long?

Having trouble drawing people, or maybe you’ve always wanted to learn? Join Crash Bang Labs for an interactive panel on drawing human body proportions! The first half of the panel we’ll discuss proportions, and show examples from comics and animation, and the second half we’ll do some follow-along exercises where we draw a basic male and female! Sketchbooks are encouraged, but basic paper and pencils will be available for those who don’t carry art supplies with them.


I'll also be located right next to my good buddy Rajamitsu at Tiny T-Rex Studios!

As always, I'll be there IN COSPLAY! What will I be dressed as? WELL THAT'S A SECRET. Basically I have a fun closet cosplay prepared (something I can toss together with minimal effort) as well as a costume I've had some fabric sitting around waiting for something to be done with it! SUNDAY IS A GRAB BAG CAUSE I DUNNO WHAT I WANNA WEAR.

Anime St. Louis is a first-time convention for me. I'll be there for the WCS Preliminaries competition (which I believe is taking place on Sunday?). I'll probably have some extra costumes on hand, but we'll see!

The little convention that surprised me! Okay, more like, "I was shocked they got information to us finally!". BUT I JEST, I JEST. This is a new convention I like to put under the category of a "Pop Con" or an "Entertainment Expo", because not only do they have some anime stuff, they'll have all sorts of other regular guests and panels, and the like.

Since it's nearby (and I won't have to stay at a hotel for a first year con, yay!), I opted to vend in their artist's alley! The whole show is going to be located in the Renaissance Center building, just like Youmacon in years past before they expanded to the cobo. I hear that we might be on the 4th floor? Near either the main events or dealers, I'm still unsure.

BUT I HAVE A TABLE, so that's really all I'm worried about (that and figuring out how to get my gridwalls up that high because they don't fit in the escalators). I'll be vending hopefully near my pal FAN-TASTIC! who will have all sorts of lovely jewelry and glittery things for your perusal!

After that, I get a couple of weeks break, and it's off to the next gauntlet of shows. And people wondered why I was trying to work as best I could these first few months. I'm not going to have ANY spare time in the next two months!