I Have Absolutely No Idea What I am Doing: AKA How to Book

Welcome to the next installment I like to call "HOW TO BOOK". I'd like for you all to join me on this oh so special journey of putting together an art book. Frankly because I have no idea what I'm doing, I'd like us to all feel like that? Wait, that came out wrong. What I mean to say is that let's all be incompetent together! No...wait. That sounds terrible too. ANYWAY...

I set out to make an art book. Truthfully I set out to do this a year ago, but I'm finally putting the nose to the grindstone and getting work done. It's been pretty fulfilling/exciting so far.

Who Makes the Cut


The first problem I came across is who did I want to put in the art book. I had a theme: I'm using it as a way to show character design and art based on all my old tabletop RPG characters. I mean, I've got like 20+ sketchbooks devoted to them all, I should probably do something with all that practice.

So I sat down and started to write out a list of all my game characters I had, or could remember off the top of my head. (of course after I organized all the old character sheets. YES I STILL HAVE THEM DON'T JUDGE ME). I came up with over 20 characters, and a lot of them were missing from that list. 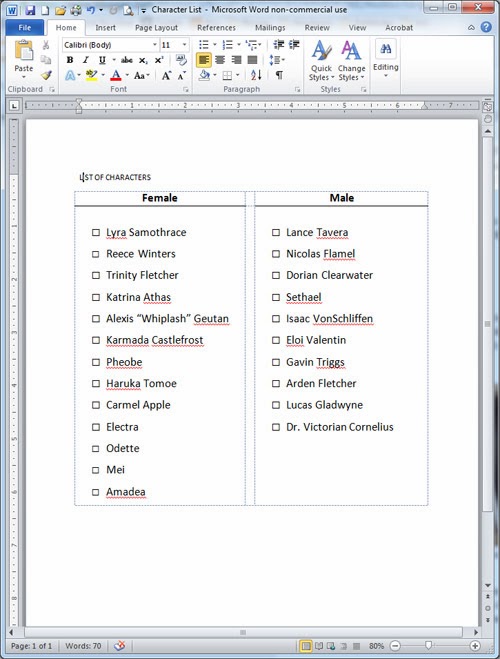 It was very clear to me I just simply could not include all the characters unless I wanted to make some sort of 200 page monstrosity. Which is possible once I've made a couple of volumes, but really, I needed to think smaller.

So after a while of agonizing, crossing off, writing down, I came down to a list that's got 7 female characters and 7 male characters. For a book that would end up being like 90 pages (at first), I could do a few nice pics of various characters in between descriptions and some old reminiscing artwork. I then set out to start designing.


First, when I started finally deciding on things, I only had a list of names to work from with no real goal. I know I wanted chibis, I wanted drawn turn-arounds, and some nice full images, but I had no real concept of what I wanted the book to have. This became very overwhelming. I think I curled up on the floor a few times being mired in anxiety and dread that I'd never get it done, and it would suck, and other various irrational beliefs.

So I asked myself "What would Aris [el husbando] do?" THAT'S RIGHT. MAKE A LIST! But what do I want? How much space do I have to work with?

That's when I got to have some fun. I dusted off and opened up my Adobe InDesign copy. It'd been a few years since I used it, and a lot of the panels got moved around, so one quick used book purchase later, I have a much newer more informative guidebook to using it. :) Which unless you're using it prolifically every day, I strongly recommend getting a guide to any of these programs. I can't express how awesome it is to have a physical way of looking up help.

I spent an afternoon setting up a "book".

I laid out the pages, tossed in some headings for each character, and tried to make "sections" of the book. I knew which characters I wanted to have more pictures of, and now I had a quantity of images to tasked with making.

Quickly I whipped open Word, and wrote out a table consisting of each picture I intend to have for each character, with a column for Pencil, Ink, and Colored.


This list now sits...er... is pinned to the large bulletin board in my downstairs work area. So I can see it all the time and have the joy of checking something off when I finish a part. ANY ACCOMPLISHMENT IS WORTH NOTING. It's fun to fill in the boxes. I'll be "done" when all the boxes are full!


One of the more prevalent pieces of advice to artists is to just keep drawing. With my new list in hand and ready to be filled in, I can work on whichever pieces I want at whatever time I want. I don't have to do one before the other. So I drew a bunch of chibis! But when I got sick of that I switched to turn arounds, and I have a few penciled bigger images tossed in there.

All the meanwhile I'm still brainstorming what scenes I'd like to do, what outfits need updating, and what I want my finished product to look like. So I'm constantly testing stuff out, seeing how it looks on my current template, as well as doing a couple of print tests here and there. I'll open up InDesign and fiddle with a page when I get a new picture done.

I'll even stick in pictures completely unrelated (see above) just to see how the image spread looks. The fun part about all of this is in a way, it's non-linear aspect. I'll do batches of certain things depending on my mood. I can do little designs on the side while contemplating larger ones. It's like having a big unweildly project, but I know as soon as one piece is done, I can fill in that box and that's ONE STEP CLOSER TO BOOKDOM.

Thanks to this, I've gotten to the point where I am planning to have a neat parchmenty kind of background on the regular pages (not including big pictures which will be full-bleed), and I have a lot of sketches to work with! I'm always thinking about the book, even when working on other stuff and it's kind of nice!

I haven't colored anything large yet, but don't worry - the internet will be the first to know. :)
Posted by Karmada

Email ThisBlogThis!Share to TwitterShare to FacebookShare to Pinterest
Labels: Artbook, How to Book, Products