Well, it's been a couple days, but I've survived Anime Crossroads!

For those new to the blog I met at the show, HELLO! *waves* It's nice to see you here! I tend to babble about artwork, conventions, and cosplay. Really it's whatever comes to mind - I'm trying to make sure I update more these days, but it's hard sometimes.

Anyway, here's a short background view of my experiences with Anime Crossroads 2013!

It all begins with Anime Central...

That's right. ACEN. That lovely con just loves to put a wrench in my plans some days, but that's okay I forgive it because I like it so much. What happened was sign ups for ACEN's artist alley started on Thursday, December 12th at 6 pm CST, 7pm EST. So firstly, I knew I wasn't going to be leaving for Indy until after 7 pm. I was thinking around 7:10? Kind of like previous years where I got in and out of their form in about 7 minutes (it only took that long cause slow server was slow).

But this year... This year we broke the server. Like, borked it bad. I don't remember it having these kinds of issues for at least 4 years. It's been slow, mind you, but never to the point where the server is sending failed messages. So they either replaced the servers, didn't have enough staff in the server room, or... there were just that many people trying for an Alley spot it completely obliterated any prior stress testing.

...which makes me nervous, but I digress, I'll rant about that later, mmkay?

So it took me (and Samaru, who I was helping through Skype voice chat at the same time), about 40 minutes to fill out the form. During which Aris went and got us Arby's that we had intended to eat on the road. And then we didn't get out until about 8 pm. So we didn't get to Indy until 1:30 am.

MAN WERE WE TIRED. Thankfully we didn't have set up until Friday morning, and alley didn't open until 3! Rajamitsu and I sent the menfolk to do their costuming panel, and we lounged about and played with a hedgehog. :P 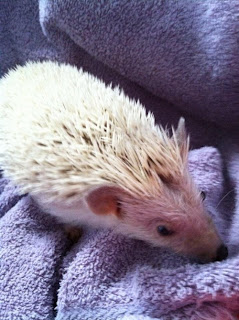 It was during this time we learned that the spots were actually first come, first serve, which was news to us. There had been a bit of lacking communication between the table coordinator and the AA head. (I was actually sharing a table for once, but I'll chat on that later in the post). Our husbands were able to procure a table for us, and then came back to pack us up and set up the tables.

Which we discovered upon getting there that the tables were 5 feet long. 5. I can't say I've ever had to set up on a 5 foot table, but it was definitely infuriating. Especially trying to share it between two artists. Only one of the grids fit on it (if we put both, we'd have a 1 ft space to peek through!). I think even those who had the snap together frames were suffering from space slightly as well (though not as much as their grids are 15" wide, whereas mine are 24"). The table was very deep, but that seemed to be because the "table" was actually two of them put together. Either way, Aris, Rajamitsu and Samaru made it work, cause I was busy having claustrophobia and had to flee the area. The aisles were very tiny and with all our stuff in it, it became very cramped.

Then as we were setting up with the intention of opening at 3, apparently the masses were getting restless, and they wanted to open ASAP (since we were in an open area that could be easily reached by crowds, not in the dealer hall). So we had to hurry and get the rest of it set up, and made it work. 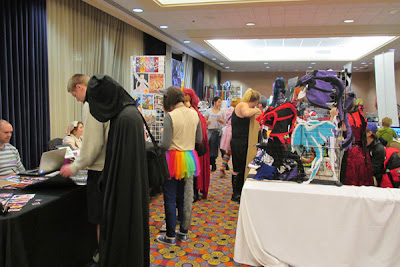 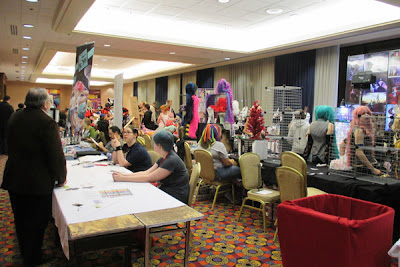 The alley itself was actually quite delightful! It was in this neat little lounge area that's viewable from the main hallway, but in it's own "room". We were sharing it with the gaming lounge area thing, but I'm almost wondering if we could have used that whole area as the artist lot?

The gal in charge was very helpful, and tried to accommodate everybody, so props to her! My only request is perhaps a little more communication ahead of the show - we were kind of confused about getting there, setting up, etc. But I digress!

First day was kind of short, but we were open late. Then around 10 minutes to "close" (aka they put up a chair barrier so we can actually go home and be people for a little while), a fire alarm goes off.

I suddenly started having flashbacks to the ACEN problems, and started wondering if I'd have to punch somebody out. We packed up and tore down quickly and dashed outside with everybody else.

We discovered upon heading outside that it had been snowing quite a bit that afternoon and we were on a winter storm watch through Saturday. Thankfully they let us back in quickly (I found out later that it was actually a faulty fire alarm, and NOT somebody pulling it, so my anger was sated for the time being), and we finished packing up and headed out.

Hey kids. Yeah. You guys. Did you know that you probably shouldn't be having a snowball fight IN A PARKING LOT AS CARS ARE LEAVING. If you are, you should probably move onto the sidewalk, and not stare at the oncoming cars like they're in your way. k thx!

Saturday was a long day, we decided to dress up, but crowds were crowds. I played some DDR, blew out my knee (WORTH IT), had some of the tasty fried rice they were making on site, and doodled a bit. I wasn't offering commissions this show - due to having to do a lot of packaging for etsy, as well as rebuilding the art lair (which there will be pics when I have it all set up!)

Sunday was kind of an... odd day to say the least. The crowds were thin, artists were trying to move products and offering all sorts of Sunday sales (which is one of my huge pet peeves at cons, especially small ones), and the crowds were thinning to an unusual subset.

Everybody was kind of manic, and as they started tearing down the game machines and the dealer hall they started running out of places to go, and just started acting weird in the Alley. After a really weird encounter, I decided it was time to be done. I think Rajamtisu was also pretty much done, so we said bye bye to the con at 4, and headed on the road. Which was good, cause then we got home at a decent hour.

RECAP OF THE RECAP

New Location, very close to the friend's house we were staying at.

Alley Location was very nice! It was like being in a room, but with the access and view of a hallway. Keep it here, and expand it more!

The food cooked on site - it was a nice touch for the hotel to offer food for us since there was no restaurants within a close enough distance for ease of fooding.

They had a bunch of signs pointing to the alley! 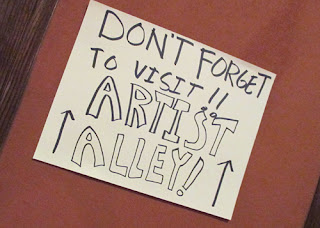 It snowed! FINALLY. I know it has nothing to do with the con, but I hadn't seen ANY snow yet, and I'm from the Great Lakes State KNOWN for snow.

New Location. It had no good space layout for gathering, and no good places for photoshoot crowds. The previous location had a lovely courtyard with a fountain, and a large area great for Anime!Kids to splay about, but there was little/no area.

Size of Table. They were 5 feet. Maybe it's just this particular hotel? I dunno. It was one of my biggest complaints.

Size of Aisles and back areas. It felt very cramped all over in the alley, and the aisles were no wider than the depth of the tables (which I think were about 2.5 feet deep end of day? Maybe closer to 3?).

Size of Table vs Cost. The reason I shared a table in the Alley with a friend is the fact that the table alone cost $100, and that didn't even include badges. So once you buy a table, and get you and your helper a badge (which were at full price) you've spent over $160. For a show that claims to have 1600 people attending this year (I'm skeptical on this), that price is higher than what I pay for show like ACEN. Who with table fee and badges maybe comes out to $120, and we get like 15,000 people there.

I made back my half of the table and my badge fee, and a little more over that, but overall sales were kind of abysmal for me. I would probably have made more doing commissions, but I don't think the crowd would like my prices now.

Crowd. Dear lord. I know this isn't everybody, but it's something that really comes out in small conventions. There's just a general lack of personal space, talking or holding a conversation, and paying attention to those around you that some people just don't have. I try to be as welcoming and accepting as I can, but after being shouted at for the umpteenth time, I get kind of irritable. But I'm gonna rant on this later.

Communication. The website and dead forums are not a good source of information. Nor is trying to contact staff. I strongly, strongly, recommend that if this convention is to continue, you guys need to get yourselves in gear. We need to know where you're at, what's going to happen, we need more details before arriving.

Only way I'd come back to vend is if the table price lowered, tables got bigger, and some effort was actually put into the actual convention. I had a great time, but business wise it wasn't worth the cost to drive there (thank goodness I was able to have a space at a friend's house!).

I'll relinquish my spot to the locals!
Posted by Karmada