Hey everybody! It's that time of the year again, that's right, it's YOOOOOUUUUMAAACOOOOOON!

So naturally, I'm busy getting all my stuff ready for the Artist Alley this time around (and a costume). For those keeping score, no, I did not vend at Youmacon last year when they first moved some stuff into the Cobo center. Which turned out to be for the better. A lot of the show last year was a major disaster, and a lot of it was out of the hands of the average staffer. Sometimes you just gotta follow your gut feeling, no? Well I decided to give the show one more try.

"But Karmada!" you cry, "If it was so bad last year why are you going again?"

I have a personal policy when it comes to conventions and shows that if I have a bad year business-wise or show-wise, I look back at what went wrong and categorize it. Was it something I could have avoided (Forgetting a cash box, accidentally ripping prints, what have you)? Or was it something the convention did I had no control over (booth location, crowd demeanor, etc)?

If it was the former, then welp, that's my bad, and I work on not having that happen again at the next one. If it's the second one, I then turn to the convention's websites and forums. There's usually a feedback thread somewhere on the forums, and there attendees will leave feedback for better or ill. I'll watch how the staff deals with the attendees, and I'll keep an eye on updates on the convention as the months go by.

If the convention appears to have acknowledged the problems and are working to fix them, I'll give them a "probation" year to see if vending there is still worth my time (as long as it was a show I broke even/got close to breaking even).

This is why I have been vending at Anime Central now for over 6 years. While the show itself may bug me (I don't like the big giant rave(s)), the Artist Alley staff department head is one of the most wonderful convention staffers I've worked with, and they actually listen to what we're saying. When we had a terrible set up, we told them, and they fixed it. They even sent us a survey! But enough about Anime Central, this is about YOUMACON!

This year, according to web sources, a lot more events, panels, and somesuch like things are taking place over in the Cobo Center. Weekend People Mover Passes will be available! Registration is in the Cobo Center! Artists Alley will now be side-by-side with the dealers, which is really the best we could probably hope for with this convention, and I won't complain. As long as we're not hidden in the back, you know?

All of these changes gave me some hope, so come see Crash Bang Labs over in the Vendor's Hall this year! I have some new prints on their way to me, so here's hoping they get in on time.

Also, to kick off the holiday buying season, I'll have a handful of special products on hand! Yes, those products I don't want to make anymore: 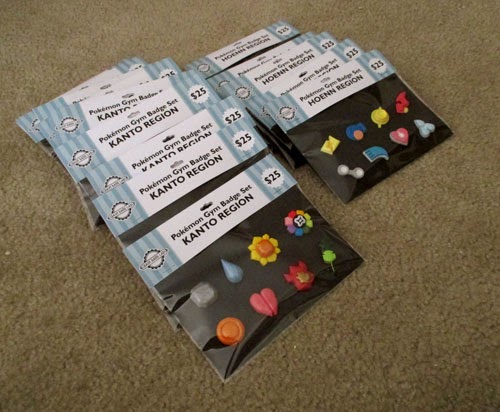 I was going through my booth stock, and found I had a handful of Pokemon Badge sets still around, but I didn't have any boxes left! OH NOES. So I went to work, and created some custom packaging for these particular sets. This is ALL I HAVE. I am working on some sets for the holiday season (barring if I can figure out how to order boxes now that they've changed their site), but for conventions, THIS IS IT.

While I'm trying to avoid having to make a ton of these, I at least wanted to give some people an affordable version ($5 less than the boxed pretty ones!).

If they do well, I may sell some unboxed ones during the holiday season as well. But we'll see. :-/

Meanwhile, I've gotten completely sidetracked on Inktober due to convention prep (and I think these monthly things need to let us have weekends off! That's what I'm doing next time). But I have, however, completely fallen in love with inking things.

I've been feeling a little under the weather mentally, so here's hoping maybe the show will help uplift my spirits, but until then it's gonna be a little quiet here at the Labs until I finish this costume. :)