For those not keeping score, I spent last weekend at GENCON! GenCon is a 4 day (almost 5 now) long convention devoted to GAMING. That means tabletop RPGs (pen and paper usually), Board Games, Card Games, Collectible Card Games, Miniature Games and Painting, Artwork, Geekiness, Costumes, Crafts, and a whole handful of things I'm sure I have yet to see (and I've been going for 6 years now).

Last year they had approximately 41,000 unique tickets sold, and this year it was predicted to have at least a 20% increase. I'd believe it. This was the scene at the doors to the dealer hall on Saturday. Thursday was even worse. (and this picture is only about 2/3rds of the doors available, this crowd was also like this on the other side of the escalator). 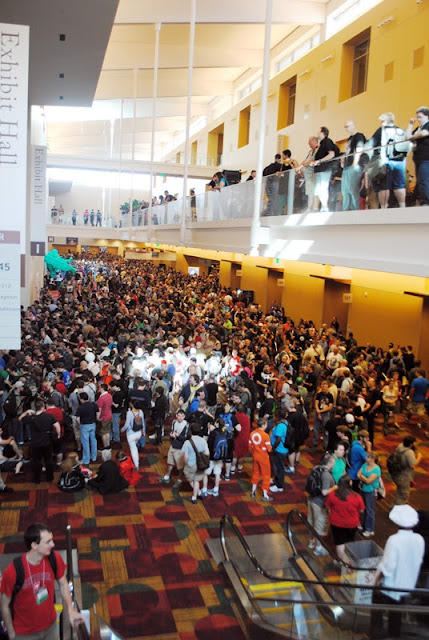 Now, of course, I couldn't go to a con without being in costume, so Thursday was Runelords day, and Rajamitsu, Samaru, and I all dressed up from it. I went as my wizard Amadea, Rajamitsu was Nadya the Rogue, and Samaru went as "The DungeonMaster", which I am working on going through all the pictures. But here's Nadya and Amadea!

This is what I made that staff for, which I'll post some better pics of it later. It turned out really really nice. Unfortunately, my boots had lost all their padding and I didn't have insoles in, and they totally tore up my feet on Thursday, so walking was kind of special the next few days.

So we spent a lot of Thursday wandering the dealer hall, checking out the booths. Needless to say, the dealer hall is also EXTRAORDINARLY huge. In the dealer hall, there are not only booths selling things, but tons of games to test and try out, and cool swag. 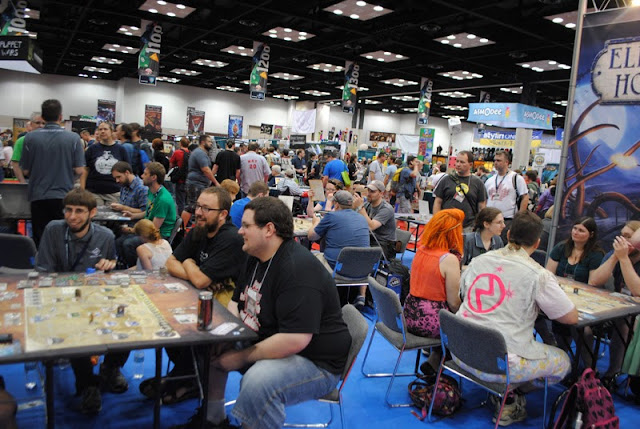 I spent a lot of time roving around the Paizo booth, because they are awesome people and I love Pathfinder. (The tabletop RPG that I play currently).Their booth was twice as big this year, and I spend Saturday morning playing their new Rise of the Runelords card game, which was surprisingly fun, so hopefully they'll do more paths in the future. 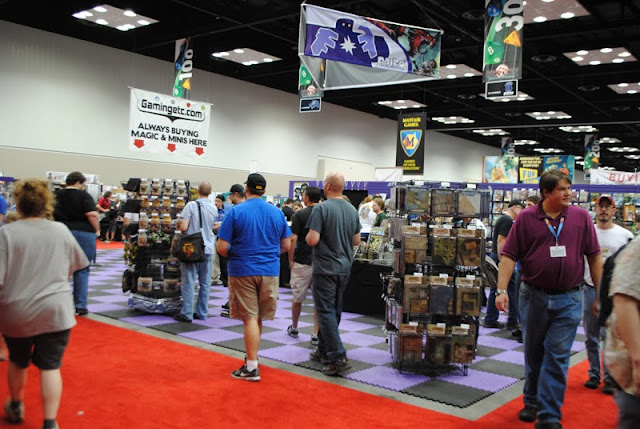 Each day I gathered lunch from the Food Truck Alley. For those who don't know, Food Trucks are like little gourmet restaurants on wheels. And every year at GenCon they fill the avenue outside the convention center built for the trucks. I unfortunately forgot to get a picture of said food trucks (whoops), but I got some AMAZING food from them. I had an amazing Vodka Marinara from an Italian Truck, I had a few servings of awesome Perogis and All Beef Hotdogs (They were sometimes the easiest truck for me to find on other days), and some great pizza, and fries with fancy toppings. There were all sorts of others like Thai food, Indian Food, BBQ, and more. Maybe I'll try more next year. OH. And dessert trucks that I was just too full to try, but maybe I'll plan for it next year.

GenCon and it's Exhibitors can't help but be hooligans, so at the Food Truck Alley, Mayfair set up this Catan themed van, with their Sheep driving it.


Thursday came and went, and then came Friday! I was dressed at Elizabeth from Black Butler, and Dave and I helped out with ...And Sewing is Half the Battle's seminars. It was a lot of fun. :D Their seminars include Wing making, Armor and Props, and they had a pretty Comb & Snood panel I hadn't seen before. The attendees came up with such awesome ideas! 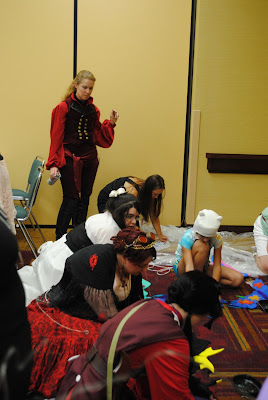 Inbetween some of the earlier panels, I had a Ciel that showed up and we went and took a bunch of photos early on so they could head out and do whatever they needed to. I'm currently going through those photos during this week.

I had forgotten my crinoline fluff, so I felt less floofy, but was still shocked at the amount of fluffiness I just got right from the ruffled skirt itself!

Then came Saturday! Our big wandering day, and we were planning on viewing the Masquerade to cheer on the Sewing is Half the Battle team. (They needed some awesome audience participation).

So during the first half the day, Aris and I wandered around a lot, and I took a lot of scenery photos. We found this particular panel room, and it made me happy! 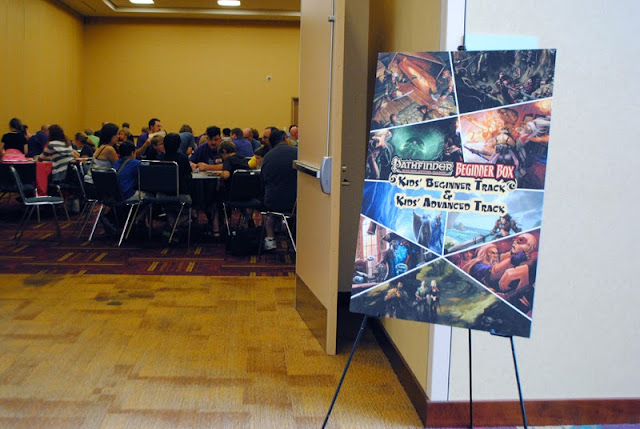 That's right, not only are the adults who come are gaming, but their KIDS are more than welcome to sessions. HOW COOL IS THAT. Yes..... breeding the future generation of gamers, one convention at a time. Keep up the awesome work, Paizo. *thumbs up*

Now Saturday was the day I was debuting my latest outfit I had made (surprisingly in the span of 1.5 days at most), due to stress I was having a heckuva time trying to sew. I was the lovely fellow on the right, and Rajamitsu was the one on the Left. These are Lucas and Stephen, respectively - and they're from our Pathfinder Game on Tuesdays. 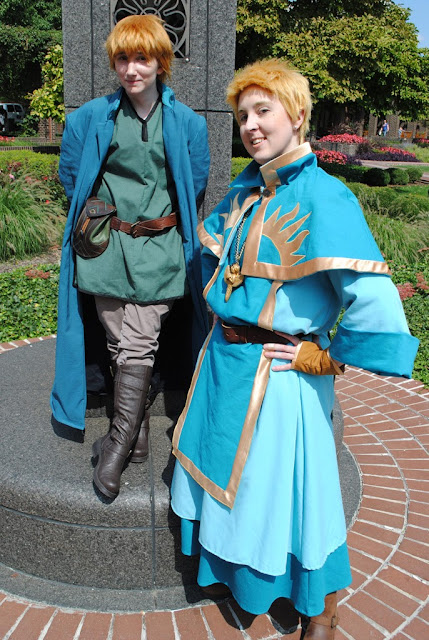 Lots of fun pictures were taken that day, and yes, I'm still going through them myself. It'll be a little while as I have some IRL stuff to take care of.

We then proceeded to the Masqeurade which was fun, since I was somewhat close to the stage this time! The costumes have very much improved over the past few years I've seen the show, and I had a really good time. Also, ASiHtB broke a chair on stage and it was GLORIOUS. Apparently it was supposed to have broken into 3 or 4 pieces, but was an old chair and in theory bugs had gotten to it. So when it was smashed on stage, it certainly broke apart, but instead of pieces, it practically turned to SAWDUST. Thankfully the stage was a hard flooring so it didn't take too long to clean up.

We then gathered all our selves up and headed to get some dinner (after fleeing the halftime show), and had dinner at this great restaurant named "Acapulco Joes" for some awesome mexican food (one of my favorites). Then headed to the house we were staying at and pretty much just lounged the rest of the evening. We were all really really tired.

Sunday came, and we packed up and got ready to go. We only spent about 4 hours at most at the show on Sunday, and then headed out after an early dinner so we could be home at a decent time. But it was good, I got some new dice (please don't fail any more will saves, thank you), a shirt, and a cool spinney ring thing.

As a last part treat, here's some of the cool miniatures that I saw at the convention (I'm working on actually trying to paint figures so they're all pretty and artistic, so these were some pretty cool examples I saw). 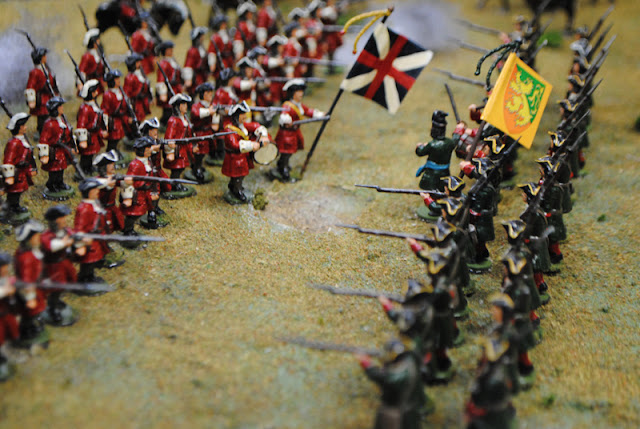 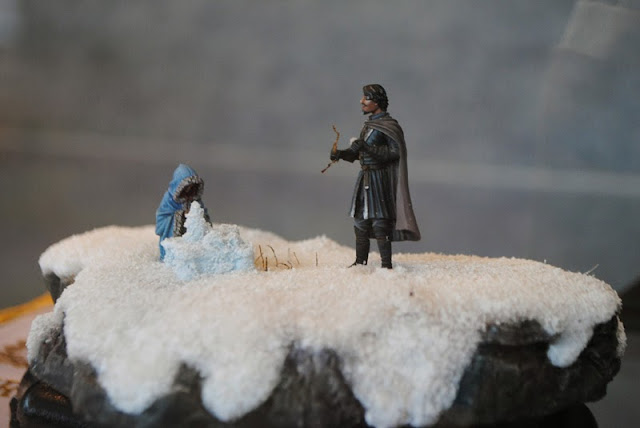 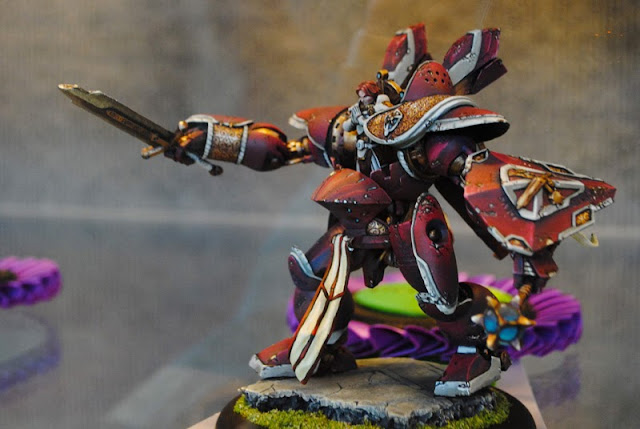 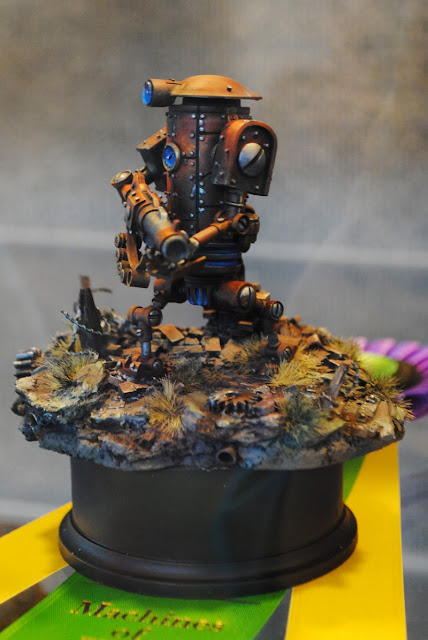 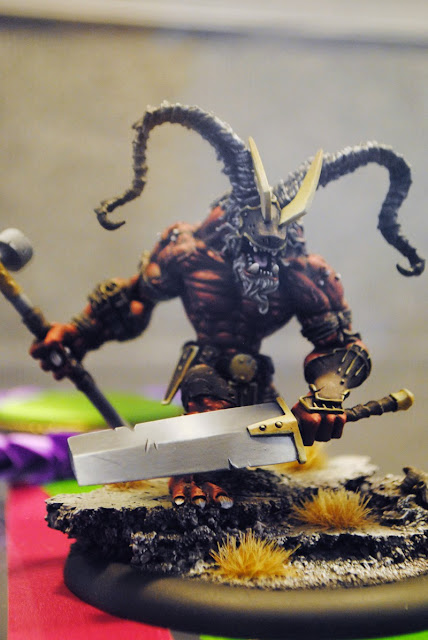 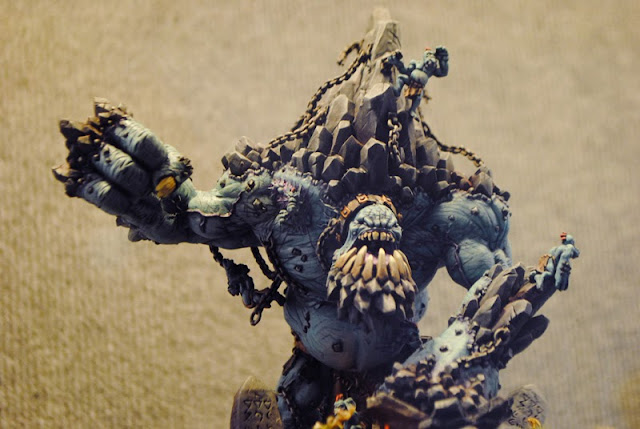 All in all, it was a pretty good weekend. It was good to get away from the craziness that is about to descend here upon me. It's gonna get a little hectic so postings will decrease until probably mid September.

Next up I have is Kaizoku Con up in Grand Haven Michigan and then Wedding Stuff! THEN the world returns to normal, and I'll have other things to post about then.
Posted by Karmada