The Power of Nature

I complain a lot that we don't get any weather where we're at. And usually that's pretty normal for me. For some reason storm systems will just get close, split, then reform around any location I am residing at. It's kind of frustrating for somebody who likes a good downpour/rainstorm occasionally.

Well, finally the other day we got some pretty hefty storms. And I'm not talking a gullywasher like we had a few weeks ago when we were grocery shopping and was almost caught in local flooding (and me without my camera UGH). It was a trees-go-sideways-rain-goes-sideways-everything-is-sideways kind of storm. I want to also say we had two of them in the same day - the first was maybe 10 minutes long, but there was one around midnight that just kept going on and on.

It was coincidentally fortunate that we also did not have our weekly tabletop gaming session that week, as we would have been driving through that mess.

Anyway, on Saturday, the day after the storm, Aris and I went for a walk because I needed walkies so we went through the local park that's about half a block away. We were surprised when we got there because a handful of trees suffered some damage (along with some of the baseball diamonds). The immense scale of these plants was amazing, so Sunday, we returned, and I took some pictures. 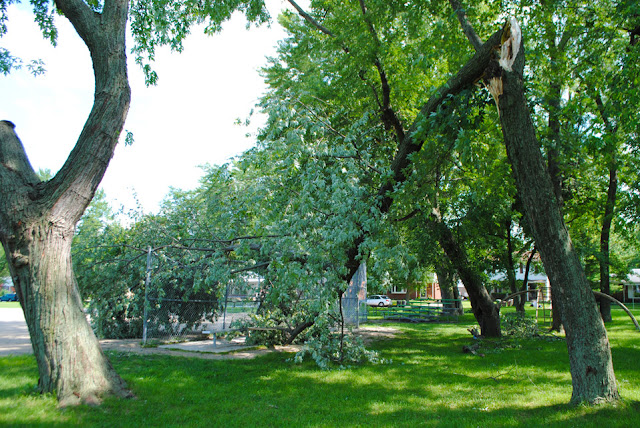 The first of my "favorite" ones was this big tree that was near a baseball diamond. Tree literally snapped in half, fell over full force. 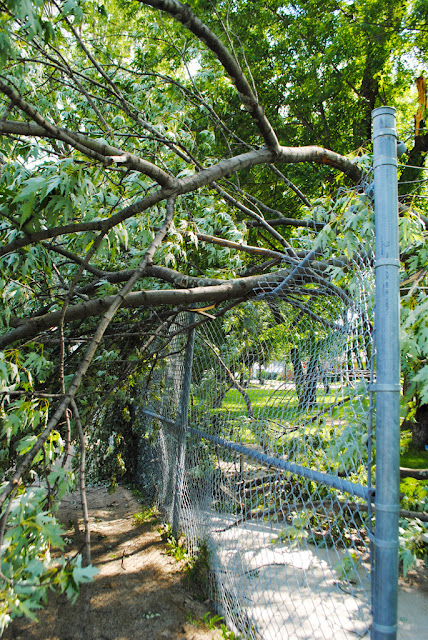 Bent that protective fence thing like it wasn't even there. It also made this cool tunnel (I wasn't gonna crawl in there though). 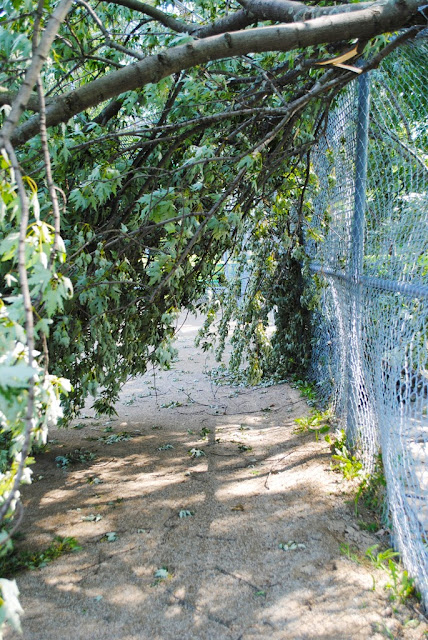 Probably my most favorite of the 4-5 trees we saw damaged was this one. I call him the Colossus. From the backside, this is what it looked like. The tree was cracked in half almost mathematically and went splut onto the ground. 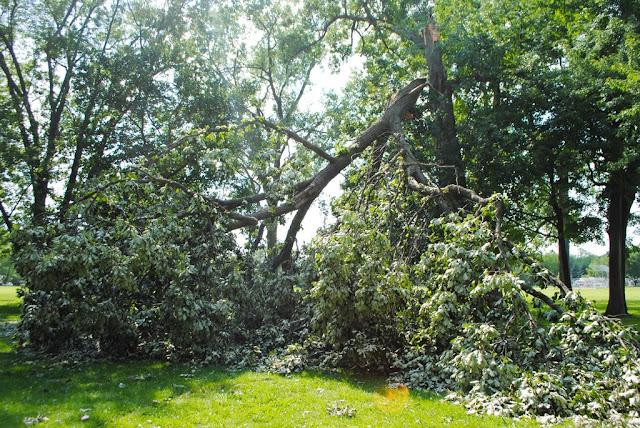 What you can't tell from this picture is exactly how BIG this monster is. Driving by you'd be like "Oh that's a big tree," but then when you stand next to it, you're like "THAT'S AN EFFING HUGE TREE." You really don't think about the size of trees until you're next to it's remnants. 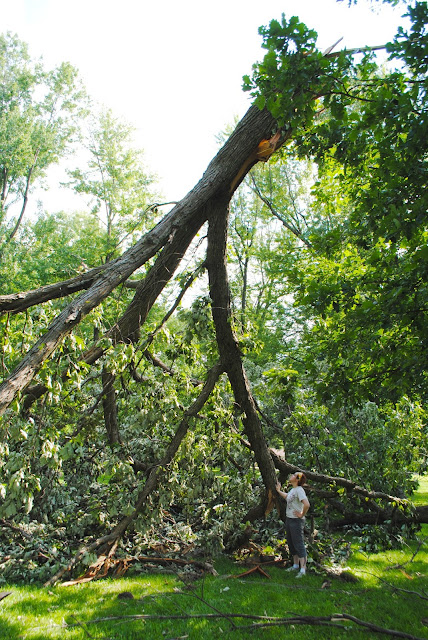 For the record I'm approximately 5'7" (67" for those counting) tall. And that's me next to the treetop that fell. And it's only HALF THE TREE. The other half was still standing. I understood what Wanderer felt like when looking down those giant colossi (but with a lot less fear since this one wasn't trying to, you know, kill me).

As we wandered further we found several VERY lucky houses, and it looks like the power outages was everywhere but where I was at. So one more prop to my weather luck! There was a block of houses that was taped off by the local power company, and trees had fallen on power lines, and snapped off the electrical line poles. One of the tops came off, and then with the force, another snapped at the base. The house it was near was LUCKY as the pole was just short enough that it didn't hit the house or any windows.

All in all, I don't wish for destruction, but these trees were pretty crazy. Made me appreciate the power of nature all that much more.

Okay, and it's back to drawing and creating for me. I'll have updates on the staff hopefully in a day or two (it's taking exceedingly longer than I had thought it would).
Posted by Karmada

Email ThisBlogThis!Share to TwitterShare to FacebookShare to Pinterest
Labels: In Real Life, Weather