Seems like all I'm posting lately are recaps on conventions! I guess it keeps my mind off of other things that I find much more stressful (perhaps I'll talk later about that, I have some other topics I want to cross sooner than later).

This past weekend I attended/vended at a show called InConJunction:


Basically InCon (as it shall be referred to from now on, because I'm a lazy typer), is a very small science fiction/fantasy convention that takes place in the little Marriott hotel that a lot of other small Indy conventions take place in. Which actually, for a small convention hotel, it's set up pretty decently.

Set up was open on Thursday (when we arrived), but there was also set up time from 9 am until 2 pm. This was due to nothing starting at the show until around 2 or 3 pm on Friday. I've had this happen at other small anime cons, so it wasn't new to me, but after having vended last at Anime Central, having to wait until 2 pm to have the doors "open" was rough. Thankfully I brought all my art supplies and kept myself busy.

Because it was a "SciFi/Fantasy" based convention, rather than Anime, we wanted to take a different view with the booth. Namely, we didn't bring some of our products, and wanted to set up stuff a little bit differently. 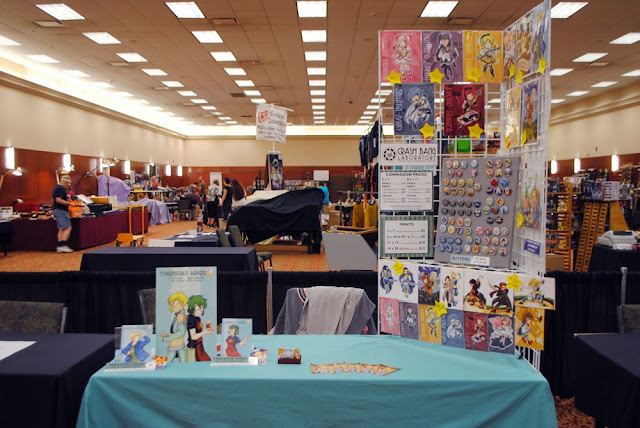 This show also gives you a pretty good idea what the rest of the dealer hall looked like. There were also a bunch of tables against both walls, and behind the "Creators Alley" (the front of the room), they had an Art Show which I didn't really participate in. 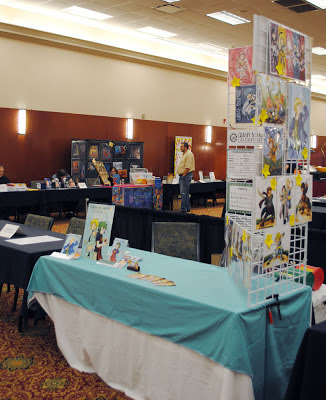 I was trying to not block the view of any of my neighbors which is why I set the wire frame on the side that I did. I'm tempted to have it be on the other side, if only to give myself more room to work on pictures. Also not shown here is we cut down some pvc piping so we can make an arch that goes from the wire frame to the other side of the table (you know, in case we need to hang more pictures). 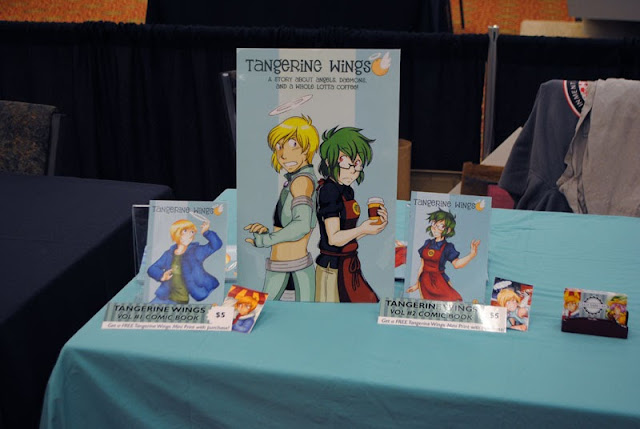 Here's a close up view of my new "banner" that I made the day before I left! It's got a heavy lamination and has it's own stand behind it. I think it turned out pretty well, but maybe some day I'll have a taller one. :)

Here was my smattering of prints and buttons I had available along with my menu of prices. I was trying something new this time, by putting little post-it notes on EVERY. SINGLE. PICTURE.

Why do I do this, you ask? Because people don't know the size a 5x7 picture is. It's one of my most frequent questions, along the side of "hey, did you draw all this?" (which really, at the end of the day just makes me laugh, and it gets harder and harder to NOT joke and say "NOPE. TOOK IT FROM THE INTERNETS").

I'm in the process of changing the text on the prints sign to (small - medium - large) because I keep getting asked, BUT, I think the post-its will help. I didn't have anybody get too confused here, but then again, there weren't many people. But I'll chat about that in a little bit.

So the room was EXTRAORDINARILY warm on Friday due to the loading dock being open ALL MORNING and it was like 80+ degrees out. Mix that with all the moving, and the people, and no breeze, and you get a day full of CON FUNK. It kinda felt like I was vending in the habitrail from ACEN with the smell sometimes.

One of the lovely things though, was that since the hall opened later (like 2 pm), they let us stay OPEN later until 8 pm. So I got a good 5 hours of selling- and got my first two commissions!

So they day was kind of a wash. There were a handful of people now and again (and some of the tables didn't show up until closer to dinner time - WTF guys). I managed to actually sell a decent amount. And by "decent" I mean, "anything from my booth".

To be honest, I didn't have a lot of hope for the show. I was mainly going because it was inexpensive and I know a bunch of fun people in Indy (and they were letting me stay at their awesome house for free), so I really wanted an excuse to hang out (and making money was just a nice benefit).

When I wasn't at my booth, I was gaming hanging out with the crew of "And Sewing is Half the Battle", which if you DON'T know who these people are, you SHOULD. They are friendly, creative, awesome cosplayers. They have a wonderful convention presence and their panels are very helpful (it's actually how I got started into more heavy duty cosplay work myself).

So, when you're done reading here, go check them out!

Needless to say, this convention was very VERY different than shows I am used to. This show felt like a very close-knit group of sci-fi nerds (honestly I didn't see much in the way of Fantasy at the show), who wanted an excuse to get together and just hang out at a hotel. Not that it's bad, it's just very different than what I'm used to. On the bright side, they did have a couple of gaming rooms, and tabletop RPGs like Paizo's PATHFINDER. Which, if you haven't played a table top RPG or have been burned in the past *coughDnD4cough*, you should try it. It's rekindled my love of gaming, along with actually liking to have stats and dice now (GASP IN SHOCK HERE).


We played a small module called "We Be Goblins" which, I have to say, I don't think I've laughed that much during a tabletop RPG in a LONG time. At one point we had to take a break because the game master was laughing so hard we couldn't roll dice. It was awesome.

ANYWAY, back to other observations at the convention...

"Geek" cons always have a weird feel to me, and one thing that stuck out to me (asides from things like con funk) were the DOGGIES. Oh jeez, there were so many little cute dogs that people brought to the hotel (I don't know how or why), but they were all very well behaved. And I got to go up and pet them ALL which made up for my boredom for parts of the show. They were very cute and loved to be pet.

Other weird thing I noticed is that at this con (I dunno about other Geek Cons) is that nobody was buying anything. And that's not just in the Creator's Alley. I hardly saw people in the dealer hall area. ON SATURDAY. It was the most bizarre thing. You could have shot a cannon through the hall during most of Saturday, which I'm used to being the busiest day of the con. Thankfully I had commissions to keep myself busy.

Oh, and costumes were on the down low, in fact, here's the only cosplay photo I took other than ASiHtB: 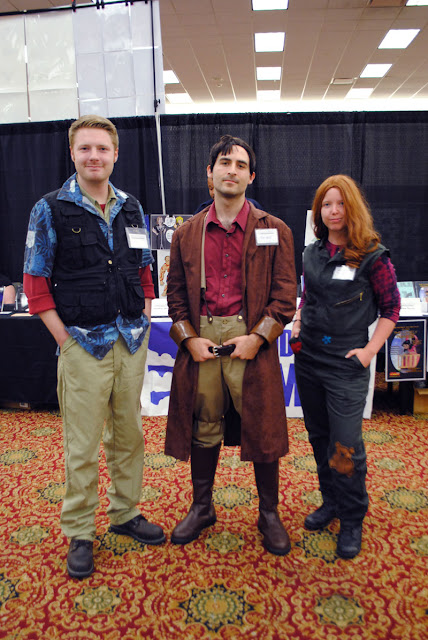 Creators Alley: This was an odd location of things. It was about 50% independent authors, and 50% artists. There were some pretty creative people there but I want to say only a third of the booths had a set up that was welcoming and "professional looking". And by professional looking, I mean items for sale displayed in a manner that makes it pleasant to look at and understand, and a demeanor that is welcoming and happy. I wanted to help people out, but it felt pretentious, so hopefully they'll just learn for the next show (I always takes notes when I go to new shows, especially if I see anything).

Sunday was okay, I made some extra sales (I guess people decided they needed to shop before they left), but I was highly irritated by the weird Paper Airplane fest that happened at the beginning of the morning. When we got there, I found out all the tables were being given pieces of paper to fold into paper airplanes and toss around. Me, thinking event-wise, thought that maybe we were going to have a "Creator's Contest" to see which one flew the furthest, but no. I was very wrong.

What happened was all the vendors down Creators Alley got out from behind their booth and were chucking paper airplanes at each other. And I was still finishing pictures people had commissioned. Two of my patrons were hit by paper airplanes, and I had to strongly resist the urge to yell at them like a cranky old lady. (honestly, was I the ONLY one working here?!) Thankfully they never hit me while I was coloring or there might have been some maiming going on.

We packed up and headed home as I had to finish up some murals for an art fair that's happening this weekend! I'll probably talk about it later this week.

So here's the TL;DR version:

It was nice to try a new venue. I wasn't swamped by people, and I made some people very happy by drawing pictures for them, which really, is what I love to do.

I also actually sold stuff, which looking at how the room worked, and other tables, I may have been one of the minority there. I made enough to at least cover the cost of my table, and if we include gas money, I only lost a total of $20.

WHERE WERE THE PATRONS?! I've never seen a show so desolate in it's own dealer hall. I can see why others have been despondent after vending there. I mean, I was lucky, some how my booth set up and style of artwork drew the eye of a lot of people but still... nobody was buying ANYTHING. And not in that "Oh I don't have any money" kind of way, but in the "I can't be bothered to shop" kind of way. And not just in the Creator's Alley - I mean the whole dealer hall.

Going to this convention made me really appreciate AnimeKids. It was nice being around older patrons more often than not, however, it felt like a lot of them didn't get out much. Didn't know how to interact with other people. I felt kind of sad for them, but scared at the same time because I didn't know how they would react to me. I'm kinda glad I was in crossplay on Saturday and didn't wear anything really girly...

I had a fun time. I networked with people, learned about a Gencon opportunity I'd like to take advantage of, but it might be dicey, (I'll keep you updated). I also learned about Anime Crossroads - remember that show I didn't get into and I wasn't sure why? Well I talked to some of the PR staff who came by my booth and heard my tale of confusion, and felt so bad I got a T-Shirt. :) So I'm trying again this year! I'll also keep you updated on my status on that too.

However, the best times I had were actually outside of the convention itself. The convention was rather lackluster for something that's been running longer than I've been alive. It was a cute cozy little con, but I don't think I'll be returning to it. Unless there's some major changes in scheduling and organization.

And last but not least, since you made it this far, here are the commissions I completed at the show: 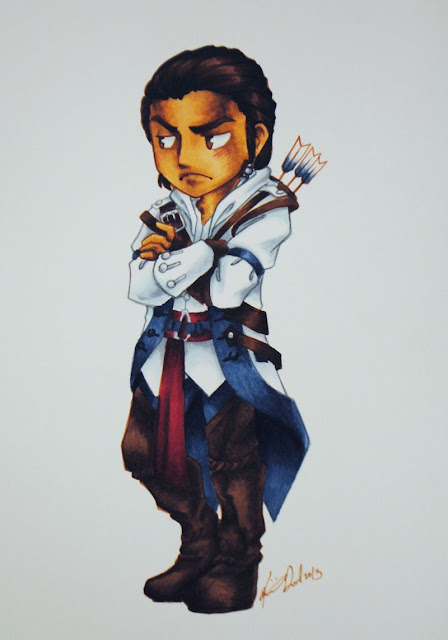 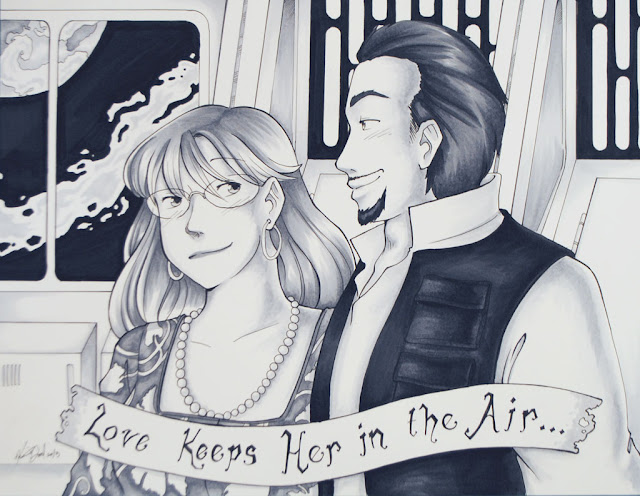 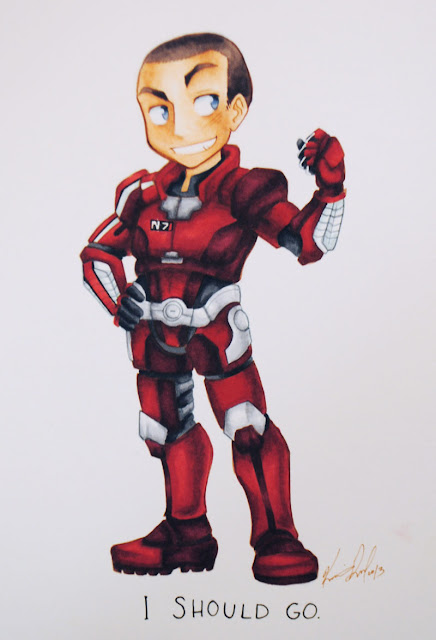