Okay! Tryin' to keep things still casual here. I'm still getting the hang of this whole blogging thing - I know there are people who spend their entire blog talking about their personal lives and thoughts, and others who provide advice or tutorials. I'd like to have a smattering of everything if that makes sense? So if the posts seem a little haphazard, it's cause I'm still figuring out my Blogging Voice.

Anyway, I wanted to open up a chat discussion with y'all today about something that's been going around the artist alley boards, facebook, and what have you.

Now I'm going to preface this particular post with this addendum: This is my opinion. I'm not trying to sell you one way or the other, that's up for you to decide.

With that out of the way, it's time for some random babble/thoughts!

What is Fan Art? 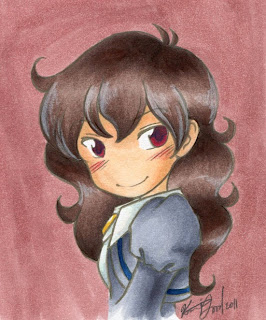 I consider Fan Art to be artwork depicting an already created character or intellectual property (IP) drawn in your own unique style. You are depicting the character(s) in their own unique design/manner, in your own style of drawing.

It could be an homage to a favorite character, or a new spin on an old idea (example: adding a steampunk twist to Sailor Moon, drawing Art Noveau Avengers, etc. Note to self: draw art noveau avengers).

Often times, it's just a simple image of the character in a person's unique style.

What it should NOT do is recreate something that is already produced (2-D art, plushies, cards, etc). It should not look identical to the original artist's images (this is often called "tracing").


What Purpose Does it Serve?

I've been chatting things up with Aris about this often when we're driving in the car to and from conventions (when we're not hashing out story details). Our general consensus (which makes sense to me when it was brought up), is that fan art acts as practice for a fledgling artist (or even an experienced one).

It allows an artist to flex their muscles, try something new, or veg out and relax and not have to worry about coming up with some unique character or design for an image. It could be a type of "mind clearing" move - something you do when you have artist block.

Other purposes Fan Art fills is spreading love for a particular character, show, story, IP or otherwise. By drawing something you like, you'll find other people who like the same thing, and then you chat about it! You can make friends THROUGH your love of the same things.

It also helps you find fans of the obscure weird stuff you may like too. Thanks to the glory of the internet, sharing fan art has never been easier. Whether it's tumblr, facebook, or the ever-present deviant art, there are places you can post your artwork and others can browse it.


What type of Fan Art should be considered a "bad move"?

Any fan art is okay, really, the sticky part comes into play when you try to sell it. I try to draw the line (no pun intended) at the small, independent, webcomics and published comics out there. And I'm mainly talking webcomics - as they are very prolific these days and can have large followings.

They usually have a singular author who's trying to make it in the world doing their artwork. And as a webcomic artist myself, I'd feel kind of shifty doing fan art of something small and independent. (Yes, I am aware I have drawn some Homestuck Fan Art in the past for commission, but I've been tempted to say no more and more just for this reason).


I'd never want to draw Fan Art of Megatokyo, Namesake, or Penny Arcade. I'd just feel... like I was stealing. They're doing the same stuff I'm trying to do, and I know I'd be pissed if somebody drew pictures of my characters for cash, when they could have come to me to draw it for them instead.

The other side I waver on is personal style. I have a bit of an eye twitch when I see people draw a currently existing character and mimic the actual artwork style instead of using their own. I can't really pinpoint it, because sometimes I say it's bad (mimicking say, CLAMPs style) and other times I'm okay with it (Adventure Time's odd style).

The verdict on this is that I'm confused, and don't know my final feelings on it. I'll get back to you on that.


Why is that different than Fan Art of Larger IPs (Like Anime, Bigger Cartoons, Movies/Shows)?

It's different because those things I consider to be "Large Corporations". They have a crew of people working on them. They already make a TON of money. As long as you're not trying to pass off the artwork and concepts as your own, I doubt they'll have a reason to come after you.

...Now if you start only selling fan art of popular things, AND are making a ton of money off it, theeeeen you might get a little cease and desist. If you do, FOLLOW IT. Please.

It's a hazy zone, but those are my thoughts on it. I hardly bat an eye when I see Legend of Zelda fan art, but my eye will start twitching when I see Homestuck art prints for sale (if they are not officially sanctioned by the author).


Should Fan Art be allowed in Artist Alleys?


Honestly, I think it should. I have never ever liked the idea of a completely Fan Art free alley. It would be awesome if the convention art world existed where the Artist Alley was completely full of unique and original items. But this is not the case.

Do I think that Artist Alleys should be composed of ONLY Fan Art? NO. Definitely not.

I don't say this because I demand people draw Fan Art, no, in fact I say it for an entirely different reason:


Convention Patrons go to the Artist Alley to find artwork of
characters they cannot find in the Dealer Hall.

It's as simple as that. Business. The first and foremost thing convention attendees visit the Alley for is to find artwork of a beloved character that they can't find in the dealer's hall.They're looking for pictures, trinkets, plushies, scarves, hats, you name it. Something that strikes a cord with them and isn't something they can just buy anywhere. Another majority of them are looking for commissioned pictures or personalized items.

There are a minority of buyers out there who are seeking out original comics, pictures, plushies and more, but they are definitely a minority. However! If you DO have original artworks, these people WILL find you. The big problem is that they ARE a minority. It'd be awesome to change that around, but it'll take time and growing your audience.

All those pictures you've seen here? I drew those. I draw Fan Art, but mostly for my booth. Sad, I know. I just spend so much time outside of conventions drawing my own things, I feel somewhat obligated to make some Fan Art items for my own booth.

I mainly use the Fan Art as a "hook" to get a patron to approach my booth. They'll notice the character, walk over, look at my displays and then go "wow I like your style!" They'll look at my original artworks, they'll read through my comics, and we'll chat here and there or I'll be working on a commission at the booth.

More often than not, they usually leave with an comic issue or two. Or ask for a commission.

Honestly, the Fan Art is more decor than anything. It's just sellable decor. :)


Is it okay to sell ONLY Fan Art?

I have a yes and no stance on this one. There are two types of artists I tend to see who vend at alleys:

1.) Artists who want to sell their art for a living and tell their own stories through their artwork

2.) People who do this for a hobby/fun/side profit.

I have no problem with either. Even the second one! I started this out as a side hobby thing, and I grew to LOVE doing it so much I wanted to make it my job.

Those who want to make this their living will slowly branch out and try to do their own original items. The hobbyist will do Fan Art because it sells. My only requirement for having a Fan Art Only booth is having a varying composition in your artwork, I beg of you. Do you draw everybody's faces the exact same but change the body? Please, don't do that. From the other artist's perspective it only makes you look like you're trying to fleece the attendees because you can.

Which that is a whole other rant.

The shortened version of this is that I find Fan Art okay to have at a booth from a business perspective, but will always encourage artists to do their own thing if they feel confident enough. Once you have enough prints, or objects of your own unique things, it's totally okay to branch out to less Fan Art.

I recommend, however, if you do NOT have a decent sized audience, or notice sales not making what you need - look around, see what's being done by those who ARE selling, and you very well might have to draw some Fan Art for your booth. It's not the end of the world. I promise.

Just draw something that YOU are a fan of (then it won't feel like you're slogging through a bog).

Email ThisBlogThis!Share to TwitterShare to FacebookShare to Pinterest
Labels: A Casual Invitation to Discussion, Artist's Alley, Fan Art, How to Artist Alley