DUN DUN DUN. It's time for another recap!

For those unawares, I had myself a convention that was called Colossal Con that took place in Ohio. I had been busy preparing for the show, which is why you haven't heard from me much.

Due to financial problems, and being a Responsible Adult, I was only able to attend the show for Saturday (I was already pre registered since I was part of the Masquerade). It didn't take me long to drive there in the morning, so I arrived props and set parts in tow, along with my costume for the day. 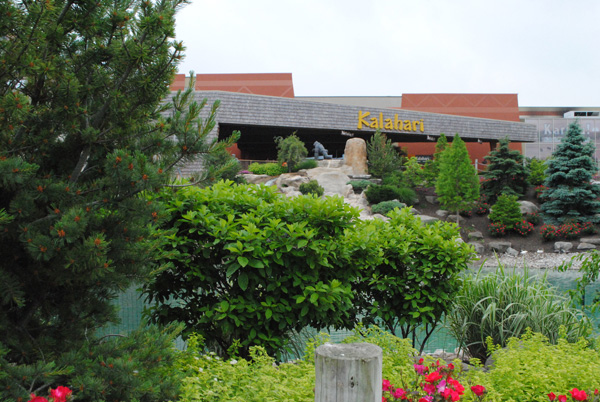 Colossal Con takes place at Kalahari Resort in OH, which is basically a hotel with a waterpark attached (there's an outdoor area + and indoor full waterpark) along with a small convention center to the side. And I say small, because I'm used to places like the Donald Stevens center in Rosemont and the Indianapolis Convention Center from GENCON.

I walked inside and there was a short (very short) line to pick up my badge. It took me like 15 minutes at most, which will pretty much tell you how small a convention it is. I'm so used to the giant ones that little ones sometimes take me by surprise.

My cosplay partner wouldn't be arriving to the show until the afternoon, so I decided that it would be a good idea to walk around for once, take pictures, and survey the show. This was one of the conventions I was listed on the waitlist for (along with many other long standing artist tables that I know), so while I was there I was AWFUL curious as to who got in, and how big it was.

But first! The wandering! 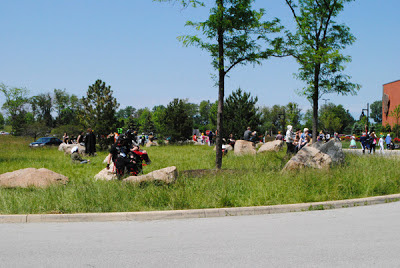 In front of the center there was this little area that was called "Savannah Grass", which had some great rocks and super tall grass and some trees that was awesome looking for pictures. I definitely made a note of this area if I come back again. 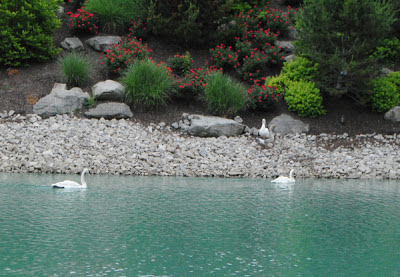 In front of the hotel side, there was this lovely pool and I saw SWANS, which was pretty exciting. Yes, they're evil, but I still think they're pretty.

Inside the convention center was kinda dark, and somewhat crowded due to the small building and many people. It definitely had a safari/tropical theme going on throughout the whole building which was kinda cool. So there were things like this cool tree thing, they had a set up for refreshments and some snacks, on top of all the rooms pretty much being used for panels and the like. 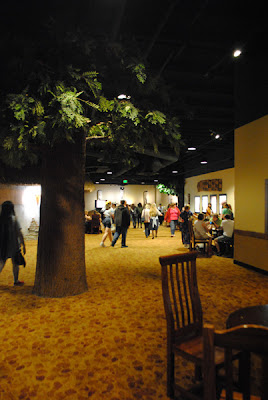 Which, if I had been staying the whole weekend, there would have probably been some panels I would have attended - their schedule was packed with a ton of stuff and rooms. There certainly wouldn't have been a shortage of things to do.

My wanderings lead me around to other various rooms, they had a boffer room, and I think some sort of zombie LARP room, and then... THIS: 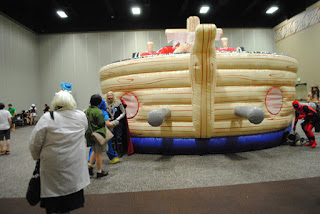 They had... yes. This is a giant inflatable boat thing. It's like the bouncy houses for kids. I... I just don't get it. It confused me. It's not something I'd go hang out on, since I would be in a costume. I was still in plainclothes at this time as it was easier for me to sneak around and get photos, instead of being stopped often when dressed up. 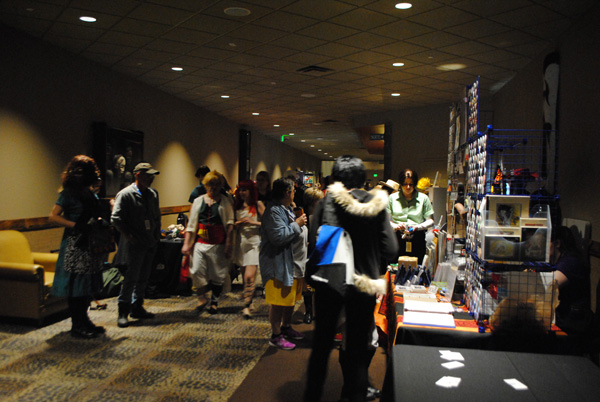 This is about what it looked like - it's one of two hallways they had tables in. They were somewhat haphazardly placed down the hallways, and in the middle at the corner turn a giant DeathCom photos booth was there. So it was a bit of a jarring effect, and if you didn't know there was stuff back there, you might have missed the other part of the alley.

As a visitor (and longtime vendor in Artist Alleys), here's my critical thoughts:

Nice try, thanks for playing. The hallways were absymally dark. This picture lightens it only slightly. The shadows that would appear behind the booth were horribly dark - and if I had been vending there I would not have been able to see my paper well enough to draw commissions.

About one third of the tables had prints. Two of these were webcomic based. The other prints (save for one booth) had mostly BBC, Supernatural, Adventure Time, Ponies and a few really obscure series. There were a bunch of other tables that had accessories, a few plushies, a bunch of jewelry, and inbetween there were a couple of convention tables.

Once you turned the corner at the end of the alley suddenly there were booths that looked like dealer booths? I dunno. It didn't feel very official as an alley, and honestly it would confuse people who didn't know what they were.

I am DEEPLY unsure if I would want to vend there.

ANYWAY. It was about 12ish when I decided to jump into my costume. I wandered around as Peter a good chunk of the day and got a bunch of pictures taken of myself. Which was great! I love making people happy with my cosplay, and I got a lot of OMG squeals from excited congoers.

I then met up with Luna, and we had a photoshoot, and then we gathered our set pieces and headed to the masquerade.

We present a skit! 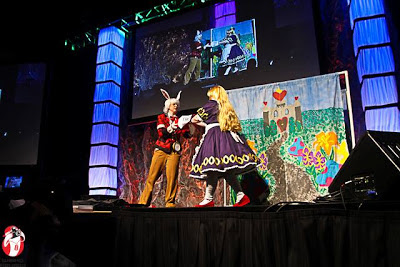 And low and behold! We won Masters Skit 1st place. 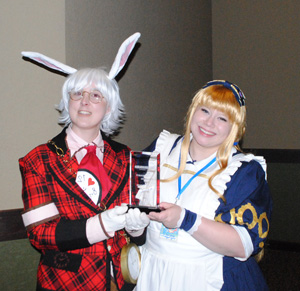 I then quickly changed and hopped in the car for my drive home. Which was pretty boring. Until I entered Michigan again, and wanted to stop by the welcome center as my last rest area. 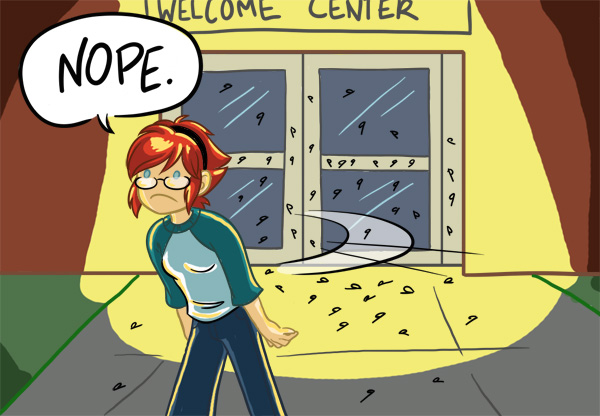 Which I quickly discovered was covered in FISH FLYS. Which if you don't know what they are, they are these horrible tiny dragonfly things that live for 24 hours only to mate, leave a bunch of eggs somewhere, and then attach to a wall and then die. And they cover EVERY THING.

Needless to say, I quickly turned around.

I finally made it back home, and collapsed on the couch. :)