Wow. Only a couple of days after the show and I've already got a recap for you! Shocking! I KNOW.

Anyway, let's get this party started, shall we?

We arrived on Thursday afternoon after a relatively uneventful drive down. I learned the new uses for my smartphone during the travel – I discovered my google maps app can tell me the traffic density wherever I am at or traveling too. Okay, so I’m probably the worst smart phone user ever (I can barely remember that the thing does texting…), but hey! I was feeling pretty useful as we got into town with little/no traffic jams.

Mainly, we took the toll road around the west side of Chicago. Honestly, I don’t mind paying an extra, what…9 dollars if it means I don’t have to deal with crazy drivers and backups. Sitting in traffic jams and spending extra time in a car is damaging to my knees right now, so the faster I can get somewhere, the better!

ANYWAY, we arrived at the hotel and checked in, meeting up with Sil from PHD Cosplay, closely followed by Samaru and Rajamitsu from Sanddiver Studios. Afterwards, we headed to go find the Alley registration. I knew that this year it was going to be a little different because we were on a different side and supposedly alley reg would be in the actual registration hall instead of say... hidden behind the Alley itself.

And they were right! WOO! I walked into the spacious registration area, and was quickly directed to a little kiosk in the back. (I didn’t have my camera at the time, so I don’t have any awesome pictures on hand as is until I figure out how to get them off my phone. Remember how bad I was at using my own phone?)

I was quickly checked in, and as I headed out, I was accosted by the table of swagbags, programs and lanyards! HOW WONDERFUL! No really! This is awesome! I usually have to hunt down programs and lanyards provided, and this one just tossed em at me. So for the first time ever I actually had a program the first day.

They had us drive around the back to unload and set up. Which was weird, but very handy. We really enjoyed having that back up camera in the car as we left, as we were dodging other cars and pillars in the hall. (DRIVING INDOORS IS WEIRD). 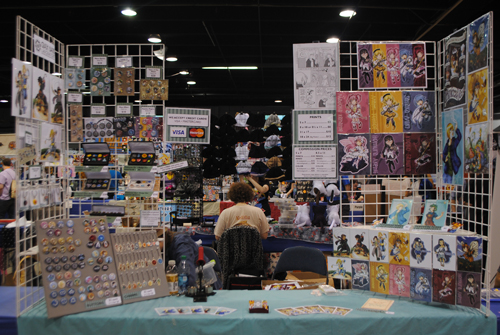 A lot of the convention was kind of a blur. I sat at my table with Aris from about 9:00 am to about 6:30 pm every day. I hardly left the booth if only to take a gander at the other Alley artists, and I think I only glanced at the Dealer’s side maybe 2 or 3 times at most.

The alley itself had changed its set up from previous years, and I have to say, I thought it was GREAT. They switched it to a more linear fashion with long rows with a couple of openings for artists to get through. They also removed any barriers between the Alley and Dealer hall, which made for a seamless transition for attendees to go from one to the other.

I got lucky, and was placed dead center in the center row, so we had pretty good traffic all day. The aisles were HUGE and that was great too as there were some big costumes and groups coming through.

My only complaint about the alley was there were rows on the very very end, and one of the sides faced the signing area and a secondary snack counter, and honestly I don’t know how much traffic some of those people got. I know I forgot it was there until I had to attempt to forage for food to eat (I’ll gripe on this later). There were also a few tables who were partially obscured by a huge concrete pillar. I felt bad for those people. So, it was a good set up, and could be improved upon. But it was a HUGE improvement from before.

Dealer’s hall finally had hanging signs with numbers so when somebody pointed out a booth to me, I could easily find it! Which was awesome because it got me a really amazing artbook.

I only donned a pink wig, and went regular plainclothes for most of Friday, and met up with Samaru and Rajamitsu later in the day as Alibaba and did a short set of pics of those costumes. It was all well and good until some random drunk guy found us at the end, started trying to take my camera away from us, then tripped up the stairs and fell over. This was the only experience I actually had with any of the drunken revelry that seems to go on at Anime Central. So either it was down, or they REALLY hid it well. 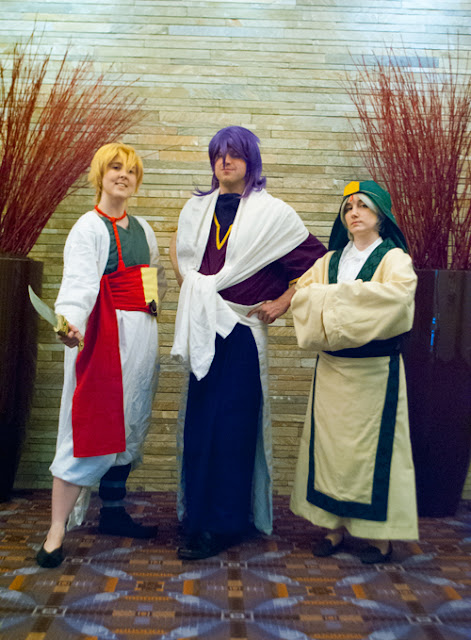 On Saturday I debut my Elizabeth costume, which I was afraid I wouldn’t fit into, but ended up getting into it just fine. I was corseted all day, and had the wig on from 9 am-Midnight. :P I wore that thing for almost 13 hours that day. It held up really well, and wasn’t too uncomfortable. The only problem is that when corseted I can’t eat as much. But that didn’t seem to matter since my food options were limited anyway (remember that gripe I told you I will talk about later?) 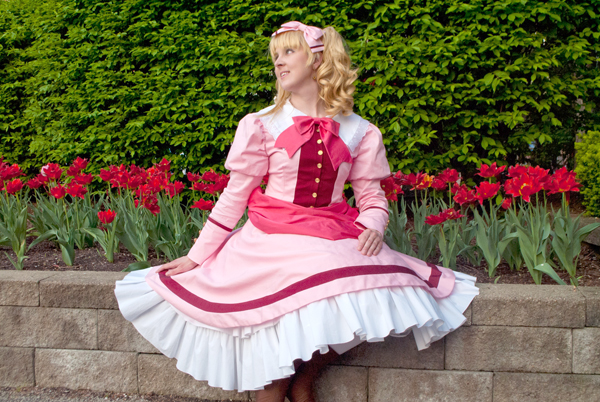 I also went to my first Black Butler photogathering, and it was... interesting. But at least all the Ciels thought I was pretty awesome. 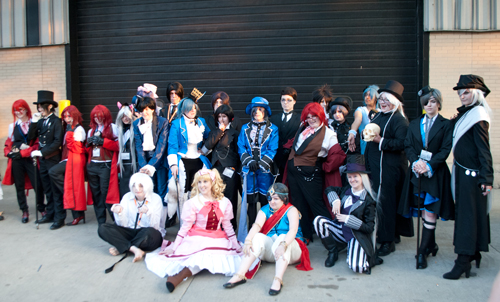 Sunday was fun, as I wanted to go in a comfortable outfit. So I debuted the start of my Ron Stoppable costume. Sil went as Kim Possible, so we derped around about that day. It was a lot of fun, and I look forward to tweaking up the costume and wig and getting this thing working properly. 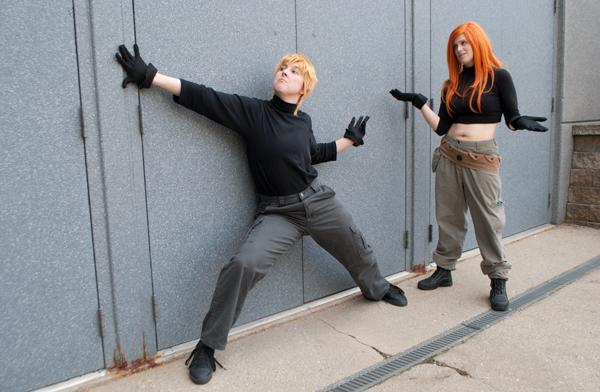 Overall, this was a spectacular convention. It had fixed so many problems from earlier, that it was the friendliest and safest I’ve felt at this convention in a long time.

I loved the set up of both the Dealer Hall and the Artist Alley. It felt so open, yet so huge at the same time. It was great.

The bathrooms. I dunno if it’s just this side, or they all got redone, but man! This side had BEAUTIFUL restrooms. No more ghetto looking stalls and sinks! It’s the small things, okay?

Pleasant Crowds! I had very few complaints about the crowd. No running screaming yaoi fangirls. No giant conga lines through the hall. No screaming hoards of Hetalia. Even Homestuck was relatively subdued (no honking horns).

NOT SO GOOD THINGS

The food. Honestly, this is really my whole complaint over this weekend. Normally, we feed off of the Expoteria, and before anybody jumps in to tell me what a rip it is, it’s at least relatively freshly made food, and can be taken in containers to anywhere in the con center. This is important for me in the alley, as I can’t go and spend a good hour or two trying to get food, and then have to sit and eat it elsewhere. That’s work time I’m losing.

This year, the Expoteria was open on Friday, but Saturday and Sunday it was closed. I have no idea why. Aris went to go and check out the snack counters in hopes of finding something I could eat, and even THOSE no longer had soft pretzels. Unfortunately for me, my body doesn’t really handle con food as well anymore, and I couldn’t really have the pizza or nachos they were offering. (it also doesn’t help with the slight lactose intolerance I have either).

My choices were candy bars, cookies, and pop or………. I could go over to the other hall, and there the center had set up their own “food stand” with exceedingly overpriced foods. ($3 for a can of pop. I CAN’T EVEN HAVE THAT AT MY BOOTH FOR FEAR OF SPILLING IT UGHHHH)

All the food they had available was not easily portable, and was terrible according to my cohorts who tried it.

So ACEN. Your next step is to fix this. Otherwise, tell me ahead of time, and I’ll pack a cooler full of food, and just deal that way. (I'm flexible! I just need to know)

Other side note on “bad” things – the program. I could not decipher what order they had the panel descriptions in. Guys. Sort A-Z or something.

I had a great time, and I cannot WAIT to come back again. I feel good things for this convention. This was definitely a step in the right direction (I can’t even find any cataclysmic events on the forums).

Here’s the amazing things I bought this weekend. Which is almost entirely from the Alley, except for the Valkyria Chronicles book, and an Arda color ring (not pictured here). 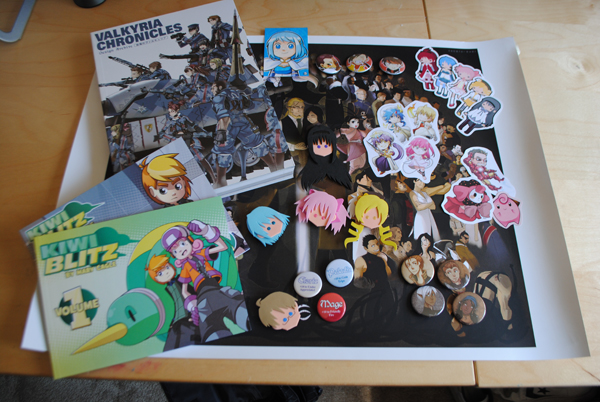 I dunno, I think I have some “rants” about artwork, alleys or conventions coming up. Any requests or questions people want me to cover? I’d be glad to chat about most anything, Alleys, Cosplay, Conventions, and whatever else geeky I seem to absorb. :P
Posted by Karmada