Sorry for the long absence guys, but I've been pretty busy the past couple of weekends. Okay, more like 3 weekends! So I'm here to start catching you up. The places I've been were Anime Matsuri in Texas, Shuto Con in Michigan, and then Anime Park at a local high school I used to attend!

So let's start at the beginning:

My adventures with Anime Matsuri (henceforth written as AM) are all in relation to my adventures in World Cosplay Summit. It was pretty crazy, but overall I had a good time, and met a lot of awesome people.

The adventure began when my partner and I headed out to get on our plane to Texas. I haven't flown in probably around 5 years, and I was scared. But I had some dramamine on my side. :)

We had to finagle a way to take all our set with us, and we came up with a pretty ingenious way to do so. Thankfully we got to check the cardboard box and pick it up at the end. 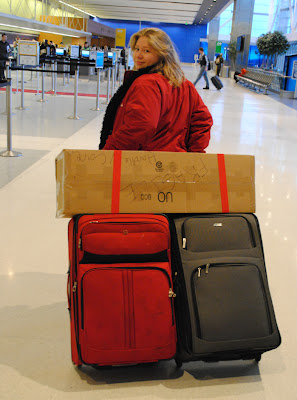 We had our connectors, and hopped in a cab, and then proceeded to the hotel. We were at a Hyatt downtown, which had pretty posh rooms, and was kind of empty until all the convention attendees started arriving. 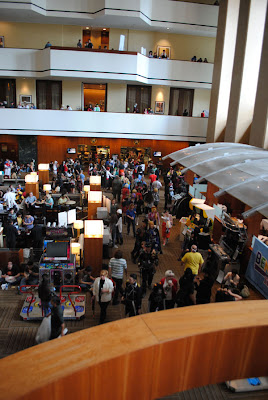 It was wall to wall people for pretty much the entire weekend. Which was great because having a lot of people is good for the convention. It was BAD because of the crazy layout of the hotel. It was certainly NOT conducive to any sort of wandering as we were all forced to the edges with weird walkways that only fit a few people across. 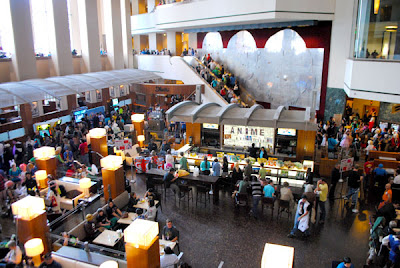 The dealer hall was in the basement, which I never got any pics of. It was weird having it down there (it took us half a day to even FIND it!)

Inbetween all the traveling, I got to go to a lot of cool hangouts with the rest of the WCS contestants, and it was so wonderful. I felt really bashful, and some of my social anxieties kicked in (too many people + insecurity at meeting new people), so I didn't really talk a lot. But they were really cool, and by the end of the weekend I had a lot more friends and my facebook feed is a lot busier now!


I visited a Tapas restaurant for the first time. Which apparently is like going to a restaurant and buying a bunch of appetizers and sharing it with everybody. The menu was in mostly Spanish with a English descriptions of what was in it. Not being well-versed in Spanish, I tried my darndest to pronounce my order, and the waiter said "You did good!" so my broken Spanish made somebody smile, hahaha.

It was good food! I'll have to try others if I ever visit one again.

On Saturday I went around dressed as Alibaba, and got swept up in a spontaneous photoshoot for Magi. (Spontaneous = I saw another Alibaba in the elevator and they said "HEY PHOTOSHOOT AT NOON").

We then went to a cool panel about WCS being put on by previous winners. It was pretty neat. 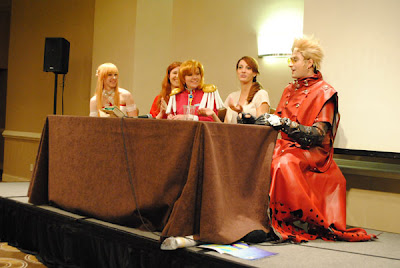 I helped out with a photoshoot my partner was in that afternoon, and then as the evening came we got our sets ready in the greenroom (after a lot of strife regarding other background stuff and them not letting us into the proper greenroom area. It was a big ol' mess, so yeah. not commenting.)

Sunday we woke up early to go to rehearsal, as well as then change, and do the final performance. It was really a giant whirlwind of stuff, so I don't have any actual photos of it. But you can probably find it all over Facebook under "World Cosplay Summit".

All the performances were so lovely and inspiring it was awesome to watch. We didn't win, but that's okay, because we'll just try again next time (and the first place team had been trying for a few years, so it's nice they finally were able to win).

After that, we headed home on Monday, had another bout of connecting flights, and I didn't get home until about 10:30 that night. I was tired!

But my adventure wasn't over yet...

I had 3 days to prepare my booth for Shutocon in Lansing that was coming that weekend!

....but that's another story for another day :)