Hello everybody who is new to blog who may have stopped by the Crash Bang Labs booth out at Katsucon 2013! I didn't get to spend a ton of time at the booth, as I was busy being wrangled for a little thing called World Cosplay Summit. But to everybody I got to see in person when I was at the booth, I say hello! And to those of you who did not meet me, but my fiancée, Hello to you too!

Because we were vending, we knew that we’d have to drive. Let me tell you, that was... interesting. It’s about a 9+ hour drive from the Michigan area, and on the way there, I was pretty much asleep.

I was up till 3 am having problems with my costume, and then just packed all my stuff and woke up Dave to leave. Soooooooooo we got there SUPER EARLY on Thursday. :P

For the parts where it was light outside (and I was awake) it was an interesting drive. I got to through Pennsylvania, which I don’t think I’ve done before, and with all the snow, random farms, and old buildings, I swear we were driving through some post apocalyptic zombie game. Thankfully there were no zombies, but we made it to the Gaylord well enough.

Oh, and I got to go through a mountain tunnel. NEAT.

So we do some last minute shopping, and arrive at the Gaylord, finding a spot in the parking garage. We then headed inside to only be bombarded by swarms of teenagers en masse so hard core I had an anxiety attack in the middle of the crowd and had to seek refuge in a nearby corner. (It didn’t help I was tired, and very stressed out) This was not a good sign.

I found out that the convention center was “sharing” with a very large teenage ‘leadership’ retreat. That’s the best way to describe it. I describe it as 2,000 teenagers with little supervision getting the chance to be...teenagers away from mom and dad.

We hung out while I finished up my costume, and then checked out the Artist Alley area to set up. Turns out that the tables weren’t even set up, so we just got badges and then went back to the room. I finished up some computer files to print in the morning before the alley, and then fell asleep from severe lack of sleep.

(note to everybody else. DON’T DO THIS (lack of sleep thing). IT’S TERRIBLE FOR YOU. I don’t even want to do it, and I had to. BAD ME.)

Friday we set up the booth, and then I went to go and finish up stuff while we went to dress rehearsal for World Cosplay Summit. It was a little disorganized, but things worked out okay. I got to sit and sew for a while, so I wasn’t gonna complain. Later, after that was done, I spent some time at the booth, and then went to get ready for judging for WCS.

All that came and went, and then Saturday came around. I makeup-ed myself for WCS early, but decided to change into it later. Which was for the best, cause then I got to totally relax at the booth for a few hours before the performance.

Which was a total blast (besides the stage crew forgetting where all the stuff went, and me breaking my prop sword :P)! I was so tired, I didn’t even have the energy to be nervous, which probably worked out, as my knee started to give me troubles JUST before going on. It didn’t seem to want to carry much weight on it, but then adrenaline kicked in and we performed anyway. And it was a smashing success. 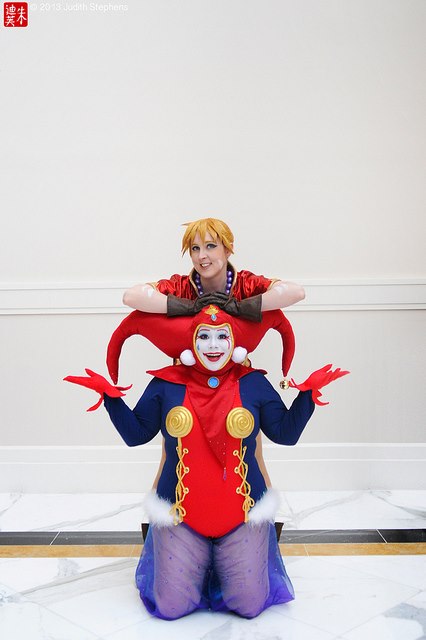 How successful? Well, we got FIRST in the Eastern Regional Qualifiers. HOW EXCITING IS THAT?! We get to be shipped to Texas for the finals, and I’ve never been to Texas and I am scared of flying, but HEY COSPLAY! I can’t wait to meet all the other teams out there! :) I am honestly humbled and grateful to be presented this opportunity. I enjoyed all the skits and everybody gave it their best!

Sunday was relatively quiet, I ran around as Pascal, took a few photos during the day, and cleaned up the booth with Dave. Bless him so much. He lived at my table. D: I want to give him all the monies.

Then after a LOVELY dinner with some old friends (and a super cute babbbyyyyy), we headed back to the hotel and did some nighttime pictures now that a lot of people were gone! Mwahaha. I still have yet to go through and separate them all, but hey.

NOTE ON OTHER GROUP: I’m sure people are wondering what lovely things I’d have to say about the other group we were sharing the hotel with. All I want to say on that is that they were being teenagers (totally dumb, and incredibly bossy/inconsiderate), but I was more disappointed in their “leaders”. On a couple of occasions my cohort and I were practically screamed at to “KEEP IN OUR HALLWAY” cause apparently we were going to “corrupt their children” or whatever. I dunno. I just remember one night the 2nd floor was separated by a berlin wall of adults telling us to “STAY ON OUR SIDE”. So, leaders, I’m kinda disappointed in you for setting such bad behavior examples for the young people in your stead.

Young people, I’m sure there were a good chunk of you who were very nice. Keep being nice. I am not judging you for the actions of your group.

Young people who caused tons of damage, turning lights upside down and smoking in your rooms. I’m judging you. But I’d judge you regardless of age for behavior like that. :P

Young People’s Parents: I implore you to teach your children PROPER ELEVATOR ETTIQUITE. Standing in front of a closed elevator and barreling in while it’s still full of people trying to get off, isn’t exactly a good way to use it.

I honestly want to do a post on “how to use an elevator” I’m so friggin sick of bad elevator manners.

And on a side note, Katsu attendees: I'm fairly certain some of us caused the other group to have to resort to hostilies. Those of you who did or said mean/derogatory things to the other group. For shame. I know we were all frustrated, but still. It's always better to be the better man, and be chill. Work around it, or get a staffer who can help you.

ANYWAY, so we left on Monday, and decided to do some sightseeing. We took the Metro (thank you teller guy who jumped out of his booth to get us tickets to catch the train that was arriving!) into the DC area, which was a lot of fun. Well the Metro was!

My leg wasn’t working so well (I had my knee brace on), so we mainly stayed around the museums. We visited the Natural History Museum which had a lot of neat things, except it was FILLED WITH FAMILIES AND TODDLERS. Wtf. Just cause it’s a holiday doesn’t mean you have to take your kids for something educational. Also, Museums. What’s the deal with the “kiddie-fication” of exhibits? Between dodging all the strollers and toddlers, all the exhibits had very simple, childish writing and activities you could “touch and learn”. *sigh* next time we’re going to the monuments.

I did however, get pics at the museum.

Then mid afternoon, we began our long trek back to Michigan. In which we learned that the little part of West Virginia that juts up between Ohio and Pennsylvania is totally America’s Middle finger.

We kept driving downwards, and when we thought we couldn’t go down any more, it KEPT GOING DOWN. We were grateful this was all in the dark hours of the night cause yeah. We’d probably be freaked out at the angle we were driving.

Also, WHO PUTS A FORK AT THE END OF AN UNDERGROUND TUNNEL? West Virginia that’s who! UGH UGH UGH.

So we got back around 3 am. And promptly fell asleep. I also got convention crud. Thanks Katsu! At least hopefully I’m immune to you now. I have finally gotten mobile and somewhat coherent enough to write, which is why it took so long for this to get to you. I’m still coughing and falling asleep randomly. BLUGH.

OKAY! That’s the end of the Katsu Recap. I wish I had more pics, but I was honestly so busy this time, I just didn't get ANY...

Onto the regular blog schedule.

TL;DR – The WCS Team I was in placed FIRST at the Eastern Regionals! YAY!