Wow. Sorry for being off the grid for like... a month.

A lot of things happened over here at Crash Bang Labs. The first largest item being: WE MOVED. Yes. Again. We've moved like, three times in three years, and frankly I'm getting really tired of putting all my crap in boxes and hauling it around.


Namely, we're hoping that this time we'll be here for at least a couple of years (and give me time to pare down my stuff. I swear it multiplies in the dark!!)

If you remember my post regarding AnimeWorld Indianapolis, it turns out they DID need help with their Alley (namely separating it from Vendors and have a dedicated DH, rather than it being spread out). I actually ended up inheriting the Alleys (if I am understanding correctly), and will be working with Anime World from now on as the DH.

I had a bit of a monumental task, but with help from my fellow staffers, and some old fashioned artist networking, I was able to fill my alley, and had a smashing time. However, I was so busy, I have like, NO PICTURES or wrap up to write. It mostly would consist of "I worked" and "I slept on the bed" and of course "I sewed in the room".

I am now in the process of catching up on my emails and will be seeing if there's any AnimeWorld stuff going on yet (probably not, as we just finished the last one for the year). Augh! It's such a busy time.

And WHYYYYY was I unable to catch up on my emails?

Well, I happened to visit...

This is a 4-day long gaming convention in Indianapolis that Dave and I visit each year for fun. Well, last year wasn't as fun (I was working at it, BLEH), but this year I had a bunch of seminars planned and hijinks ensued.

I learned how to paint minis and finally had my "Homestuck Coming Out Weekend". That's right folks, I'm a 'Stucker. I'll have more on this in the next post ("GENCON RECAP"), so never fear. Also, don't be afraid I'm not going to inundate you with Homestuck too much here that's what Tumblr's for.

In the meanwhile, enjoy these pictures: 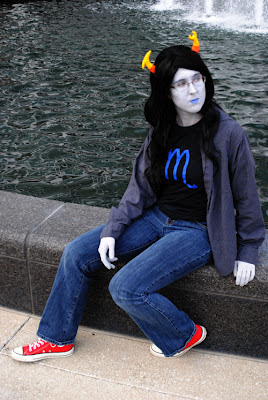 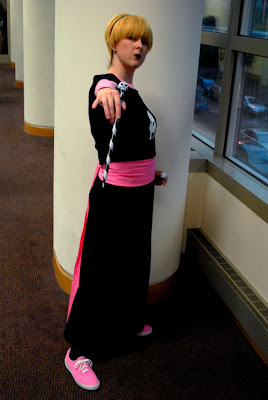 So really, I just did this giant post to get to this last part, which probably has the MOST IMPORTANT part of my announcements. Due to a TON of fortunate events in my life (I am eternally grateful for) I have been able to take the next HUGE step in my life.

I have quit my regular day job...

That's right, I'm doing this art thing FOR REALS. Starting around September (it'll take that long to finish unpacking and preparing all my materials), I will have all new products up in the Crash Bang Etsy store, along with offering commissions, and if I can get cracking down, I'll have a constant stream of comics updating between Sky's End and Tangerine Wings (and possibly an Art Book in the next year).

I'm super nervous, so I may ramble a bit now and again (and possibly go stir crazy as I am working from home). I'm planning on reviving the Crash Bang FB page (WHUT) as well as working on the Crash Bang Tumblr (NO WAY).

I also have made my official "office" at the new place!


So yeah! That's all the updates for now. I'm off to do some drawing or something! Gotta flex those muscles again, after all my gallavanting.
Posted by Karmada

Email ThisBlogThis!Share to TwitterShare to FacebookShare to Pinterest
Labels: Convention Babble, Cosplay, GenCon, I am a Terrible Blogger, In Real Life, OMG, Update