So... I guess it's high time to announce something fun, right?

And now that it's finally HERE, I can show you guys.

And you'll believe me, right?

Okay! So here's a picture. 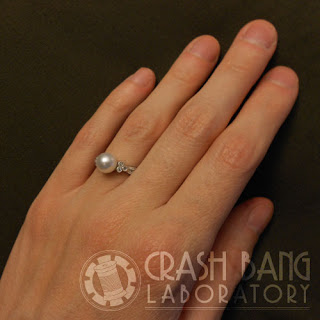 And no. We don't have a date set yet.

Email ThisBlogThis!Share to TwitterShare to FacebookShare to Pinterest
Labels: In Real Life

Revising My Booth, Yet Again, and a Fan Art Rant

So I've been researching here and there while my arm has been out of commission (finally kind of healing - haven't heard back about that physical therapy though. Boo), and I've come to decision:


I need to redo my Artist's Alley Booth
(Yet Again)

But WHY? You ask?

That, and more and more anime conventions are cracking down on fan art, in fact, many are adopting the 50/50 rule. Which I think is okay. I don't want a fan art ban, per se (like ohayocon does), but I would like to see some more original talent appearing.

Which brings me to another question - those booths in the alley I see at Comic Book Conventions - where they're plastered with all sorts of renditions of Superman, Batman, Wonder Woman, and whatever other smattering of comic book heroes/heroines you're looking for....

What are the rules on that? Cause I swear there were booths there that were entirely fan art with people hoping to work for places like DC or Marvel. They certainly wouldn't pass the 50/50 rule at an anime con.

I haven't done a lot of research yet on their alleys (I'd love to vend at C2E2), so I honestly don't know. But it seems kinda unfair if us "anime artist alleys" have to submit to a 50/50 rule, but if you're drawing at an american comic convention anything is free game? (Yes, I am aware they frown/refuse on selling things like charms or buttons, as opposed to prints/books).

Not that I want all the publishers to come crashing down on us, but still... why the double standard?

Anyway, I digress. I am interested in obviously writing and printing more comics and my own art. That's a given, and I'd love to have prints of my own characters and stuff.

I guess a lot of interest will come once I draw more pages and get more audience to read them. Once my friggin arm heals remotely enough to try.

Which leads me to think maybe I should start looking to accomplish an honest to goodness full image every other week (while I still work full time)? I'd certainly post links to them here.

Anyway, this post was kinda rambly. Sorry about that! These things happen from time to time.
Posted by Karmada No comments:

I've got some updates for you, but I really wanted to post SOMETHING here, right? Need to keep my schedule.

So I figure I'll talk about my next upcoming convention: JAFAX!

(capitalization for those who aren't sure where the X comes from - I'd like to say it's cause it's XTREEEEEEME but that's the 90's kid in me talking).

It's a "sort of" convention (they prefer the term Expo, but we all call it a convention), that takes place at Grand Valley State University in Allendale, Michigan. Organized by the University Club "Otaku no Anime", it's a FREE event that happens one weekend in June - usually around Father's Day somewhere.

They have Screening Rooms, Panels, a Vendor Hall, Artist's Alley, Videogame Rooms, and of course, COSPLAY EVENTS (I was actually the coordinator for the Cosplay Events for the past 3 years. I have since passed it on due to busy-ness IRL).


Since the event is put on by a campus group, the fee to get in is...FREE! (or standing in a really long line Saturday morning, if you wanna get picky about stuff like 'time cost').

The only real bummer I can figure out about JAFAX lately is that it's only 2 days. There's so much going on, and that could go on, they could extend it to 3 days. Problem is getting the buildings to open up to them a day earlier than they already do. I think there's classes or something to that flavor that prevents it.

This convention sort of holds a special place for me and for Crash Bang Labs, as it was the very first "convention" I did Artist's Alley at.


I've been doing it ever since.

It's also the very first place I got started in cosplay at conventions.

I've also been doing THAT ever since. (Heck I ran the Masq there).


If anybody has any questions about JAFAX, you can either check out their website www.jafax.org, or you can always post a question here.

I'll be there giving a couple of panels, and generally derping it up!

P.P.S. This is also the convention where I learned first hand the intelligence of testing costumes ahead of time, and NOT USING CLEAR ELASTIC. IT DISSOLVES IN SWEAT.

I of course, learned this on stage - I can totally post about it if people REALLY want. :P It's kind of legendary now...
Posted by Karmada 3 comments:

Quote of the Moment

That's all for today.

Just keep being awesome.
Posted by Karmada No comments: