I've finally somewhat recovered from my giant trip out to the great land of Chicago, so you know what time it is? ACEN 2012 RECAP TIME!

ACEN 2012 was ... an interesting time, to say the least. There were some high times and low times. I plan on talking about both, because it's silly to just wax over the little bumps like everything's special. No event will ever go precisely as planned, and we all need to know how to deal with the bumps and bruises. I will discuss this at the end of my recap. I'd rather go over all the cool stuff I did.

We both took the day off on Thursday so we could take our time and pack everything up in a leisurely manner. Having been up late the night before finishing a bunch of packaging, it was absolutely wonderful to know we did not have to rise and shine at ungodly hours of the morning.

After a few mishaps of our own, namely a bottle of Dr. Pepper deciding to explode in the kitchen like a sugary carmel grenade, (I wasn't there, but the aftermath is pretty spectacular) we were packed and ready, and headed out. Of course, forgetting a few key things. Like lactose medicine. WHAT. WHY DO I FORGET THESE THINGS. (I'm acutely lactose intolerant, but I love cheese. I consider it Fate's cruel joke on me.)

Sooooo after making a few stops, we headed out on the road. Again. We totally just did this like... what, two weeks ago? But this time we have a full vehicle, loaded with supplies, wire frames and the like.

Made our 5 hour trip pretty uneventfully, but needed to find a way to drop off our stuff to get it into the alley and then drive to our hotel. For the first time in like... what, 6 years we decided to stay at a hotel that is NOT walking distance from the convention center. This was for two reasons: 1.) I wanted to be cheap, and this one was 89 a night and 2.) It was not technically a "convention hotel" which means I will not be having to fight off loud room parties when I'm exhausted from working a 10 hour day.

We were able to pull into the circle drive, and Dave went and parked the car. We brought our stuff in (with minimal issues too!), and set up the booth as much as we could. I was of course having major anxiety and self-esteem issues, but that's kind of par for the course when it comes to Artist's Alley sometimes. It also didn't help I have been going through a very long extended funk with my art.

We checked into the Hotel, and I used Magic!Phone to find a Portillos. And it was combined with a pasta place. HOW AWESOME IS THAT?! It became our new "go to" restaurant of Chicago Suburbia.


Meanwhile, we wanted to pick up a couple of forgotten things at the local Jewel Osco that was there. I find that Chicago is full of strange and unusual things.

Friday was a bit of a blur to me. I wasn't cosplaying this weekend, as two weekends prior I hurt my foot, and I realized the table spaces were WAY too small to try to fit some of my costumes through without bumping people. So I was in civvies all weekend, which felt really weird, but ended up working out for me in the end (more on this later).

The gates opened, and the herd came rushing in. I must admit that Friday was very much a pleasant surprise as we had steady traffic ALL DAY. Usually Fridays are kind of dead, and we're all sad and lonely in the Alley, but the removal of the side walls helped a LOT. So if you ever see this post, ACEN AA DH, THANK YOU. YOU HELPED US SO MUCH.

It was hard for me to stay at the booth, as I'm used to managing other things at the same time, but I think I hung in there pretty well. I've been to so many conventions that going into the dealer hall isn't that exciting any more.

However, Dave did win the "awesome" award for finding this for me:

We shut down the booth around 7 pm when the doors closed and we went and got our only costumes for the weekend to head to the Masquerade Ball. Which was a total let down. Oh gosh. I'm so sorry I paid $25 for a ticket. Wait, sorry about $50 cause we both had to buy a ticket (you couldn't buy them in discounted pairs).


I'd go into my gripes and whines, but let's just say the room was WAY too small for the event that was scheduled - only half the attendees were on the dance floor, not cause they were shy, but because the floor was FULL when we entered around 8 pm. FULL. Dress code was loosely enforced apparently, and our light snacks were just pretzels in a bowl. To top it off, the DJ only played what I'd like to call "Rave Light" (a bunch of continuous techno/dubstep remixes of top 40 songs, I think is what one person described them as). For a dance that claimed to be a "ball" with apparently waltzing lessons beforehand... it super failed. Having been to their masquerade ball in years prior, this was not an elegant affair. I've been to school dances better than this.

I did meet some very lovely people, and some fabulous Prom!Stuck cosplayers. Had to get me a picture, of course.


Despite all the downsides, I did get a fun photoshoot in over at the DoubleTree (WHY DID YOU REMOVE YOUR AWESOME STAIRCASE ASDFJKL). I'm still messing with the pictures, but here's one of em: 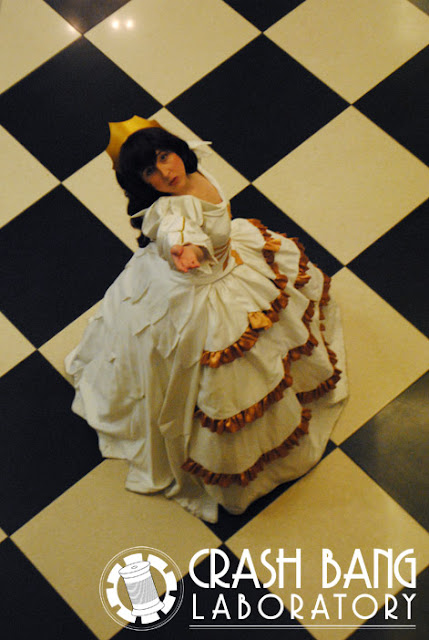 The nice thing about staying at a hotel a little further away, is you sometimes get a FREE CONTINENTAL BREAKFAST. So for the first time in half a dozen years, I had real breakfast before I left each day.

Got to the booth, sold stuff. ALL DAY. I actually got some commissions, which I for some reason suddenly could actually COLOR properly for once. It was such a lovely feeling. What wasn't lovely was that I slept funny so I had a really bad tensed muscle in my shoulders.

Heard about the Masquerade, which I will talk about in my next post. I want to give it proper dues and discussion.

We were waiting for our Indy!friends after the masq, so we sat around and saw Alice in Wonderland (the new one) whilst receiving our unusual text messages regarding the show.

Upon their finish, Dave and I headed over to the hotel, picked up one of the Indy!Friends, and headed over to Chilis for some food. Really, we all just needed to get away.

Once again, I found that Chicago is filled with STRANGE AND WONDEROUS THINGS.

Went back to hotel, Slept.

Remember that bad shoulder muscle problem I talked about? Well I'm going to blame the hotel bed, but it was so bad, it was piercing pain up my spine at the base of my neck. I was on a lot of ibuprofen that day, so if I didn't see you right away, or looked angry, it was cause I was in very intense pain only staved off by medication.

Sunday was also a blur. Got to sit around and hang out with And Sewing Is Half the Battle at my table for a while discussing things like the masq, other cons, and cosplay. Really the usual. It was a fun time. We'll probably meet up at the Anime World conventions which are on my list to vend/visit/panel at.

We waited until the VEEERRRRYYYY last minute to pack up what we could, and managed to fit it on both our carts. So yay for packing! Then began our grand adventure home.

First, we made one last stop at the Portillos/Pasta place and had a great dinner, and I stopped at the Jewel Osco (again!) to get a heaty pad thing for my neck, as it wasn't getting any better and I had no way of laying down at all.

Once again, we figured that traveling through Chicago on a Sunday afternoon would be fiiiiiiine. Once again, we were wrong. Though I think I have figured out the main reason for Chicago's troubles: They don't understand MERGING. Honestly. I saw so much awful merging I wanted to jump out of my car and beat them to death with their steering wheel. It's like the concept of pausing to let a car in every other vehicle space is completely foreign concept in other mysterious lands states.

Also, they can't seem to figure out construction. After diving off one of the exits to a side road to lead us to UltraFast!Lakeshore Drive (thank you smart phone), we got bogged down in traffic yet again. Only to find that the reason the people were being slow was that they stripped the first layer of cement off the concrete and apparently a half inch to inch deep, 3 feet wide rut was too difficult to drive over.

We drive through potholes larger and deeper than that all the time back in Michigan.


We ended up making it back around  midnight, and then thankfully got to sleep and did not work on Monday. We were so exhausted.

COMING UP NEXT: A somber discussion on some of the "not so great" things about the weekend. It's something that needs to be talked about.

Here's what I did at the convention: