I think I'm setting a record by talking about Shuto Con so close to it being over.What can I say? It ended up being a really good weekend and I'm still on a bit of an adrenaline rush from the whole thing. So here's the recap of my lovely weekend!

I had Thursday off, so I planned on spending it working on my Masquerade competition dress, while we packed and waited for my comics to arrive. Needless to say, it was an extremely stressful day for me.

A.) I was running out of time and everything was being sewn so slowly and I almost wanted to light the applique on fire cause it was trying to malfunction in my second sewing machine (I had to put the tension down to almost 0 to get it to look right, which just seemed plain WRONG to me).

B.) My comic shipment hadn't arrived. I waited until 5:30, and stopped back at 6 (I had to pick up some supplies after stopping at the bank and JoAnn's before we left). I was kinda mad at this point, as I had spent extra to get it delivered on time (and almost killed myself getting it done so fast).

Everything seemed to be going wrong, and I was filled with massive amounts of anxiety (which is kinda normal for conventions for me lately). Oh and lack of food. D: I was hungry but couldn't eat.

So anyway, as we drove up that murky afternoon, I sent a message to Ka-Blam via my smartphone (yay technology) just politely asking them "Hey! I didn't get my order, did it get lost? Kthxbai" (shortened for reading ease).

That night I finished up sewing the commission, which turned out super cute, and late that evening I reached a turning point. I had received an urgent message from Ka-Blam Printing. The person who had been handling my order had replied, and pretty much told me it was unacceptable I had not received my order yet, and asked for the hotel address that I was at so they could overnight the package so I'd receive it on time.

Ka-Blam just became my favorite printing company at that point. :) I sent them the address, and they shipped it on out, so it'd be there on Saturday. Hooray! Something was going right.

I then could NOT fall asleep to save my life (I blame the rabid anxiety) and finally slept around 4ish in the morning, I think. At least, that's what the clock said the last time I looked.

Friday was kind of a blur. We set up the table, and every time it looks different. I had some extra shelves this time around, and all sorts of new things to put up. I'm finally starting to be able to put up my own artwork on one side, and have my fanart and stuff on the other. I'm hoping to eventually run out of space. That would be awesome.

I was dressed as Zero Kiryu that day, and met quite a few Yukis. I was very surprised! I don't see a lot of VK cosplayers around, so yay! But, I was never in the right place or time to have my OWN pictures taken, they were with other people's cameras, so look for me in Shuto Con pictures. :P

It was also hot out like bejeezus. OH GAWD. I had not planned on it being like, 80 degrees out, so I was "casual Zero" most of the day (meaning: sans jacket).

I slipped out around 4:30 pm to work on finishing Rue. Worked on that blasted thing until 2:30 am. Damn I was tired. I also ran out of fabric - I had wanted to make some extra ribbon tails on the back, but I'll have to add those later. The crown was also malfunctioning, and it wasn't painting like it should. Thankfully it was Dave's model paints to the rescue! they did the trick, and matched better than the spray paint we used earlier.

In the middle of this, I went out to eat at our local Jimmy John's with Tony and Wendy, and of course I forgot a camera, so alas, no proof I actually DO go out and do things.

Had a sewing party for a while, and that was fun! We were getting our Masq costumes ready to go.

Went to bed late, but it was done, and I was ready to be Rue.

Woke up early. Adrenaline would do that. I was kind of nervous (but not really) about getting judged that morning, and the costume was surprisingly easy to get into. I think it took me longer to put on make up than it did to put on the costume. Hrm.

Got myself dressed, and waltzed out that door to be a pretty pretty princess all day. Helped open the booth, and then traveled to the Masquerade judging area. I wanted to get there early in case there were openings, so I could help things go along faster.

As always, I got to be Cosplay Mom outside in the waiting area. I was talking with all the various cosplayers floating around, usually reassuring them everything will be fine, and give them tips on walking and the like.

I got to talk to the coordinator, and apparently Dave and I were almost the emcees for the Masque. If I hadn't been participating in it, they'd have contacted us. Oh well, maybe next year! That sounds fun. I might also do panels.

Got judged, went back to the table and sat. I actually had purchased a special chair for the purpose of sitting behind my table as Rue. I obviously can't sit in chairs, so I had a small stool I could slip under my gown and rest on, and not wrinkle my outfit.

Waited and waited and waited, and finally my package arrived. I went over to the hotel and picked it up (they made an enlarged copy of one of the pages for me too!), and found out there were extra copies added into the shipment cause they felt bad. OH EM GEE KA-BLAM you are awesome and I will now pimp you out to the rest of the indie comic world.

It also helped the quality of the books was AHMAYZING. I can't tell you how nice they looked. So here's a picture I took today:

Got it back to the table, and set it in it's little easel thing, and went back to selling. Got some commission requests, and did my first Credit Card sale! HOW EXCITING!

I even sold quite a few of my comic books! It was very thrilling.


So then, I went and did the Masquerade, which for being a first year was pretty good! Stage was a little small, but that's to be expected at a first time version. I look forward to seeing it grow and change over the next few years. It could turn into quite the formidable show.

I got first place in the Master Division. I was the only person IN said division, so I guess, yay award? I'm hoping more people step up to the plate next year and take the plunge. I've noticed a lot of people were very "new-ish" to conventions and cosplay and were very nervous about their skills. Hopefully having access to a "real" convention will help them grow, branch out, and maybe drive out to other conventions in the midwest. Shuto Con is only the start. 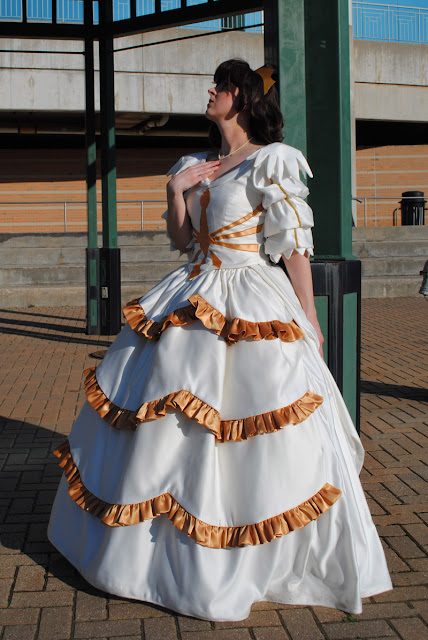 Went outside and got some pictures of the costume before I went and changed out of it. I think they came out well. Also got some pics at The Enthusiasts booth, and they came out great. Even bought some prints!

So I got to go to dinner with my good friend Erin who stopped by for the day - walked past all the crazy bar-restaurants cause it was St. Patrick's Day, and found a lovely little Chinese restaurant to eat at. They had SUPER good lo mein, and I may go back again next Shuto Con.

Got home, went to work on commissions.... and then found out how much Rue tore up my body. Every muscle hurt, and it hurt to even walk. I was also exhausted and fell asleep mid-drawing.

Needless to say, not much got done (not even seeing Terminator 2 or Riddick!). 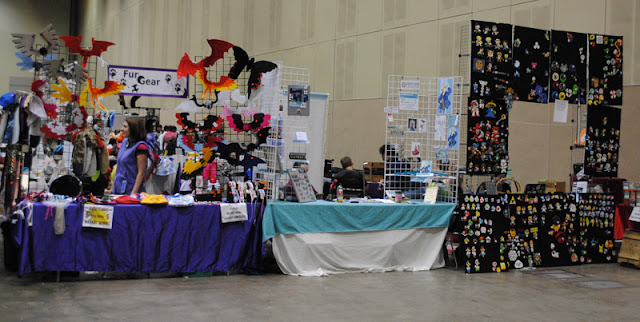 Woke up "early" cause I fell asleep so early the night before. Bein' fully rested was great, but I was still sore. So I had to pass on wearing Marle that day - that and I couldn't put anything on my hips without intense pain (I think I bruised my hip bones). So civvies it was!

Got all packed up, and went to the elevators. And waited, and waited and waited. I eventually took the stairs down so I could get to the table and work on commissions. My thumb had also mostly healed at that point.

Dave and Amanda (a friend staying in our room) took quite a while to get down to the booth (they were packing cars) and I found out that apparently the elevators were bogged down with passengers. Right as I was about to start complaining about "Silly Anime Kids Not Knowing Elevators" it turns out it was the hotel staff who was using them all that morning. Trying to get to the rooms to clean them up way before actual checkout time. Needless to say I was disappointed in the hotel at that point, and I plan on letting them know how it boggled everything up. Otherwise, hotel was pretty awesome.

Flow of people at the booth was nice and steady, it wasn't too dead, but it wasn't chaotic, which was very nice.

Got the commissions finished and waited till around 3:45 and started packing up. Said all our good-byes

+ Ka-Blam really came through. They are awesome, and I am using them for ALL my indie printing needs.
+ Costume came out great. I had so much fun.
+ Sold a lot of stuff, even my comic books! Which I was kinda surprised about cause they were original stuff not fanart.
+ Got to see a lot of fun people I don't see very often, and made some new cosplay friends. One is in the relative area, and wants me to work on a skit maybe for Katsucon. HOW EXCITING.

~ It was hot. I wasn't planning on that, but they did give us waters, and I drank a LOT of water on Saturday.
~ I was the only person in the Masters division. C'mon cosplayers! Have some assertiveness you guys are awesome!
~ I hurt my thumb and it was puffy for a day. :(
~ I didn't mention it earlier, but I really hate it when people play music in large dealer halls. You know, the big ones, with lots of echoing. You can't hear the music well, and I have to shout to my customers. Not fun.


- Hotel staff. C'mon guys. First you just watch us be encumbered and try to hold down the broken down button, then you fill the elevators on the CONVENTION CHECKOUT DAY with your staff. Grr.

Next up: Cosplay Roundup and ANIME CENTRAL. OH GAWD.
Posted by Karmada