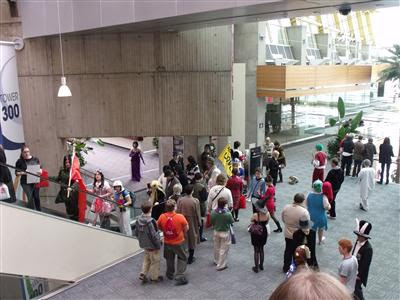 Well another Youmacon has come and gone! I had a super busy, but pretty darn good time at the convention.

This year, the con was at a new location: Detroit's Renaissance Center. I arrived on Thursday night to get my badge, so I wandered around a bit to get a feel for the new place. It's a good thing I did, because I would have been REALLY confused.

I was in the artist's alley yet again this year, and there were some changes, and I have to say, it made life all the better! This year they featured assigned tables, so I could come in the morning and set up when I felt like it, as opposed to waiting since 8 am. Very nice.

Got me a table on the edge of the inner circle, so my back was to the center of the building, where there was a lot of space. I believe it was because I needed a laminator, but it certainly helped with my claustrophobia problems - and that's a good thing. Because there were many times I was swarmed by people.

Ended up working Friday until 10:30 pm, I had to boot people away - we hadn't even gotten to our room yet! That ended up being a little bit of a fiasco - as they gave us the wrong number so I had to to go up and down a couple of times between floor 3 and 57. Kinda disorienting at first.

Saturday was super busy as Friday was, and tons of people stopped by. THANK YOU ALL by the way, I'm glad I could provide a great product, and I got a TON of new ideas (which I'll be featuring on here!).

I saw some really awesome costumes that day:


Meanwhile, as we were walking around, our attention was brought to the fact that the RenCen actually looked like a Sephiroth Tree/Pillar, and I just HAD to get a picture of it.


Saturday night, we left the table around 8ish because we wanted to avoid the crowds on the elevator. I got to relax, watch some Hetalia, and then after that played some ROCKBAND! I was actually SOCIAL at a con in the EVENING.

Here's some of my favorite pics from it:

I had a lot of fun being Luke. For some reason, when I'm dressed as him at a photo gathering, I totally get pimped out by all our female characters. Maybe it's cause Jade looks like a girl, and Guy's afraid of them.

Pssssst. I totally made the Natalia outfit all the way on the right. YEAH.

All in all, it was a very successful, if not BUSY weekend. The convention definitely suffered from some growing pains, but I think if the staff takes a gander at the feedback boards, and has a stern chat with the hotel (who clearly didn't believe that many people would show up), things will definitely improve for next year.
I definitely plan to be in the Alley, that's for sure!
Posted by Karmada